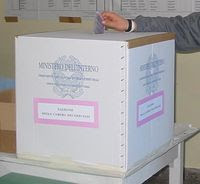 I know that polling often brings about various results, but this is interesting:

A polls analyst from Newspoll is expecting tomorrow's federal election to be an extremely close contest and says it could be a week before a definitive result emerges.

Martin O'Shanessy says that, based on a poll to be published tomorrow, the result is certain to be a cliffhanger.

"I think we might find it very very close in those key marginal seats that we have to see and there may be a lot of recounts and protests around the edges," he said.

Today's polls all show Labor in front, but by widely differing margins.

An AC Nielsen poll gives Labor a massive 14-point lead, after preferences, but a Galaxy poll has the ALP leading by just four points - the best result for the Coalition this year.

Hmmm, so while other polls show a substantial Labor lead, Newspoll shows it to be very close.

Could Newspoll be modifying its results in order to support a conservative government?

And guess who owns Newspoll?
Posted by One Salient Oversight at 12:55

These polls all depend on who they ask and what questions they ask. back in 1992 I did some door knock surveys. Very difficult to ask some of the questions - thinking of financial institutions what types spring to mind - oh do you mean banks - I was seeking a response of credit unions - no one ever got that.

I answered an election phone recently - obviously directed at bennelong voters. The questions were complex - very unclear (did I consider interest rates an issue) - and some sounded like they were repeated but there was a variation - obviously to see if one gave the same answer. The last was who did I think was going to win. Now that is a loaded question. Will it be the basis of declaring someone the winner. based on Polls I'd be saying Labour and up comes the big margin.

the West Wing TV show although USA was certainly interesting on how Polls can be used.

The poll that counts is tomorrow.

Psst
Sky News on web as we speak:
Who has the best vision for Australia's future?
John Howard 57%
Kevin Rudd 43%

So which Poll do you want to take.