US Shares and the US Dollar 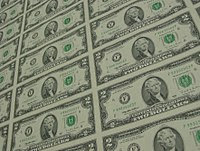 Back in early August, when the US Sharemarket was tanking, I noticed that this was accompanied by a rise in the value of the US Dollar. So while US Shares were dropping in price, the US Dollar was appreciating... for a while.

Since then, the opposite has happened. The Sharemarket recovered in mid August and grew for a few months - and this growth was accompanied by a decline in the US Dollar.

I'm assuming that, when the sharemarket begins to tank, investors, who have sold off their share assets, then place those funds into US government bonds, which are a safer form of investment. This increase in bond market activity then results in an increased demand for US government bonds and thus the US Dollar.

The issue is, however, whether this process is neutral or depreciative. From what I can gather, the continual devaluing of the dollar has resulted in no real appreciation in sharemarket value - but any resulting upsurge in the price of the US Dollar has not returned it to its historical average. In other words, the market is taking money out of America by selling shares, buying government bonds, and then selling these bonds to purchase Euro, Yen and other currencies.

What we're seeing is capital flight from America. The entire world will be affected by this process, but it will be America that suffers the most.

Unless, of course, the Fed raises interest rates. But Helicopter Ben isn't likely to do that anytime soon.
Posted by One Salient Oversight at 12:27