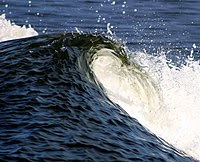 From the department of prepare-to-meet-thy-doom:

Giant waves, also known as monster waves, have been talked about by sailors for centuries, often related to unexplained disappearances at sea, but no one quite believed them. They have been considered merely a myth until recently, when new studies using technological developments like buoys, radars and satellites have scientifically proven the existence of rouge waves, and that they exist in much higher numbers than it was ever expected.

The software can be used to provide warning of an approaching extreme wave, giving time to prepare and minimise its effects.

That's good. Now all the sailors on board the ships can know beforehand that they're about to die...

(Hat tip to Slashdot)
Posted by One Salient Oversight at 13:24