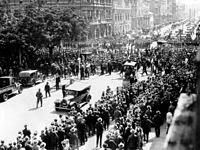 This is something I've created - it's a way of measuring unemployment based not just upon those without work but also upon those who are not in the workforce. This latter phenomenon is called the Participation Rate.

If you make an arbitrary line at 70% and say that 70% is the ideal participation rate, then here are the stats for Australia's "Non-employment" rate (Based on 6202.0, Labour Force, Australia)

Interesting figures. Western Australia is obviously enjoying its mining boom while both the Northern Territory and the ACT - both small in population - nevertheless have very high levels of employment. Tasmania's unemployment - which reached a (20+ year) low of 4.9% in September still has the lowest participation rate of any state in Australia, thus making it the worst place for employment. South Australia is struggling, but look at NSW - once the "premier" economic state it appears as though the other states have overtaken it. Given that the housing boom first started in NSW, it now appears as though the effects of the boom are over now - and that the boom never really delivered good levels of employment (unlike mining, of course, which is why WA is so good at the moment).
Posted by Neil Cameron (One Salient Oversight) at 13:07