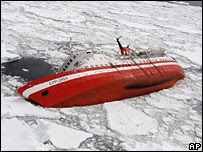 More than 150 passengers and crew have been rescued from a stricken tourist ship after it hit ice off Antarctica.

The M/S Explorer is now lying on its side close to the South Shetland Islands, in the Antarctic Ocean.

Gap Adventures, which owns the ship, said 91 passengers, nine guides and 54 crew members were safely evacuated to lifeboats and then to another ship.

M/S Explorer crippled in the frozen waters of the Antarctic - Outlook not good.

And here are some comments that people made:

The captain gave the Word to Excel, but they crashed. Now they have no Access to shore.

But they made it the to the FrontPage on all major Publishing sites.

They aren't sure how this happened but Dr. Watson is looking into it.

Wow, I hope all those people will zune be brought to safety.

I hope it all Works out for them as well.

Another couple of hours and they'll have to Bob.

Fortunately they sent out a Messenger before they sank. The rescue team has a large Windows of opportunity to save them. I'd say there is a 95 to 98 percent chance of success. I'm just glad this didn't happen to ME.

I hope no one lost their Passports.

The recovery team will try to restart it in safe mode.

It's the driver's fault.

I think they need to remove those drivers, and install some new ones.

It will be recovered ASP according to a source on the NET.

Posted by One Salient Oversight at 10:40