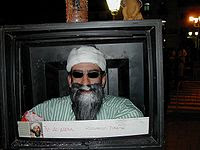 From the department of incompetence-is-the-only-explanation:

Labor is demanding the Prime Minister spell out what he knows about Liberal Party members handing out bogus ALP election pamphlets.

The flyers were distributed in the marginal Sydney seat of Lindsay.

The fake documents claim to be from the Islamic community and they are designed to turn voters away from Labor.

She says he should "disclose all that he knows and all that the Liberal Party knew about this scandalous affair".

The Liberal Party says all up, five people were involved and they have been banned from the campaign.

Two party members have been expelled.

Labor says one of those involved in the mail-run is Garry Clark, the husband of the retiring member for Lindsay, Jackie Kelly.

It says another is a member of the New South Wales Liberal state executive.

Liberal MP Jackie Kelly says a fake flyer linking Labor to a fake Islamic group was meant to be a joke.

The Liberal Party has been damaged by revelations that Ms Kelly's husband Garry Clark has been involved in distributing the flyer, which purports to come from the non-existent 'Islamic Australia Foundation', in her marginal Sydney seat of Lindsay.

The fake pamphlet says "we gratefully acknowledge Labor's support to forgive our Muslim brothers who have been unjustly sentenced to death for the Bali bombings" and calls for more mosques to built.

The New South Wales state Liberal Party has expelled two of its members over the flyer and Labor and the Liberals have both referred it to the electoral commission.

But Ms Kelly says people have failed to see the funny side.

"I think its intent is to be a send-up, but it obviously hasn't worked," she said.

The Liberal Party in this seat hasn't just shot itself in the foot, it has managed to publicly amputate it with a bandsaw. I mean, really, this is just small-town amateur stupidity, nothing like the mud slinging machine that both parties wield at a Federal level. Having members of their own party, including one senior figure and another who happens to be the husband of the retiring Liberal candidate, walking the streets, putting stupid flyers designed and written by morons... I mean this is the sort of stuff you'd expect from Upper Tocumolambah shire council elections in 1947, not some Sydney suburb in 2007.
Posted by One Salient Oversight at 08:32