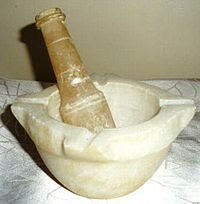 The NSW Coroner has found there is sufficient evidence for the Director of Public Prosecutions to consider laying charges against the parents of a baby who died after they treated her with homeopathic remedies.

Gloria Thomas died in May 2002 in Sydney Children's Hospital of sepsis, or bacterial infections.

The nine-month-old, who was severely malnourished, had been suffering from such terrible eczema that much of her skin was split.

The inquest at Glebe Coroner's Court has been told the cracks in her skin caused the baby agonising pain and were a potential source of entry for the bacteria that killed her.

Parents Thomas Sam, a homeopath, and IT professional Manju Samuel treated her with homeopathic remedies rather than her prescribed medication.

State Coroner Mary Jerram terminated the inquest today after finding there was a reasonable prospect the evidence presented to the inquiry could convince a jury to convict "a known person or persons of a serious crime".

There is no doubt in my mind that the rise of medical science has resulted in the loss of traditional remedies that have been used for hundreds of years. However, there is also no doubt in my mind that much of what passes as "traditional" or Homoeopathic medicine has more to do with magical thinking and blind acceptance of the placebo effect as being evidence of its success.

Incidents like the one above - which is not just horrific but also salutary since one of the parents was a trained homeopath (presumably) - show just how dangerous is modern society's reliance upon the unproven, the untested and the well-marketed.

Of course, "Big Pharma" has its own problems, but I would rather take the advice of a trained medical professional over a modern witch-doctor any day.

Posted by One Salient Oversight at 19:37