1 Million construction jobs to go in US 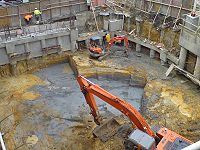 The brilliant website Calculated Risk, an economics blog with a subprime focus, has been checking the figures and finding the link between the amount of houses being built and the amount of people employed in the construction industry.

The figures don't look very good at all.

Click on this graph. As you can see, the recent subprime bloodbath has been responsible for a rather severe downturn in residential construction. Employment in the sector has begun to taper off, but is currently experiencing a "Wile E. Coyote" moment as it hovers above the cliff, legs pumping furiously, while observers wait for the inevitable fall.

What the mavens at Calculated Risk have done for us is to show the causal relationship between residential construction and the amount of people it employs - currently around 3.2 million. That relationship was steady up until the residential housing market began tumbling. At some point, employers, facing decreased revenue, will have to reduce the size of their workforce to compensate. The way things are going, I would guestimate that these employers will begin laying off workers in droves soon enough. If the causal relationship is to remain, then the amount of jobs lost would look to be around 1 million - just under one-third of the labour market.

Frightening? Absolutely. It's also bad when you consider the other people who will lost their jobs directly as a result of this downturn, namely real estate employees and mortgage company staff. Then you have to factor in the indirect losses - the drop in demand for construction material will mean that many electricians, plumbers and factory workers will lose their jobs. Then you have to factor in the reduced spending of all these unemployed people, and supermarkets and other retail stores will have to lay off workers as demand drops. This would be enough to raise unemployment levels from 4.7% (October 2007) to around 6.0% within the next six months. There's a prediction for you.

And that's without factoring in rising oil costs and a falling dollar.

It's looking like a bleak Christmas in the US.
Posted by One Salient Oversight at 08:54

No surprise. But as someone who has been having extreme difficulty getting construction contractors willing to even bid for work, this may bode well for me finally getting some capital projects done.