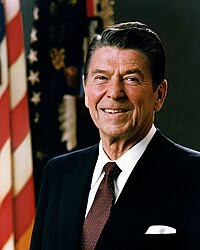 From the department of smashing-rose-coloured-glasses:

The murders were among the most notorious in American history. They constituted Neshoba County’s primary claim to fame when Reagan won the Republican Party’s nomination for president in 1980. The case was still a festering sore at that time. Some of the conspirators were still being protected by the local community. And white supremacy was still the order of the day.

That was the atmosphere and that was the place that Reagan chose as the first stop in his general election campaign. The campaign debuted at the Neshoba County Fair in front of a white and, at times, raucous crowd of perhaps 10,000, chanting: “We want Reagan! We want Reagan!”

Reagan was the first presidential candidate ever to appear at the fair, and he knew exactly what he was doing when he told that crowd, “I believe in states’ rights.”

Reagan apologists have every right to be ashamed of that appearance by their hero, but they have no right to change the meaning of it, which was unmistakable. Commentators have been trying of late to put this appearance by Reagan into a racially benign context.

That won’t wash. Reagan may have been blessed with a Hollywood smile and an avuncular delivery, but he was elbow deep in the same old race-baiting Southern strategy of Goldwater and Nixon.

Everybody watching the 1980 campaign knew what Reagan was signaling at the fair. Whites and blacks, Democrats and Republicans — they all knew. The news media knew. The race haters and the people appalled by racial hatred knew. And Reagan knew.

He was tapping out the code. It was understood that when politicians started chirping about “states’ rights” to white people in places like Neshoba County they were saying that when it comes down to you and the blacks, we’re with you.

And Reagan meant it. He was opposed to the landmark Civil Rights Act of 1964, which was the same year that Goodman, Schwerner and Chaney were slaughtered. As president, he actually tried to weaken the Voting Rights Act of 1965. He opposed a national holiday for the Rev. Dr. Martin Luther King Jr. He tried to get rid of the federal ban on tax exemptions for private schools that practiced racial discrimination. And in 1988, he vetoed a bill to expand the reach of federal civil rights legislation.

This issue of whether former President Ronald Reagan was a racist has been bouncing around the op-eds of America's newspapers for the past few weeks. The issue was started by New York Times columnist Paul Krugman whose new book, The Conscience of a Liberal, contains a section that is critical of Reagan's attitude towards African-Americans. Interestingly, Krugman was a minor advisor during the Reagan administration (if Wikipedia is to believed). Fellow New York Times columnist David Brooks wrote a response, arguing that Krugman was putting words and actions into Reagan's mouth. Krugman responded by listing numerous occasions where Reagan's words and actions supported the idea that Reagan had ulterior motives.

I have yet to make up my own mind about this. Nevertheless Reagan did become part of McCarthyism in the 1950s and ratted out members of Hollywood as Communists - an action which indicates some level of paranoia and misguided nationalism that seems to typify American racists.

Posted by One Salient Oversight at 18:56

Balderdash. Goldwater was no racist, and with the exception of guilt-ridden liberals like Krugman, few have believed otherwise. He opposed the Civil Rights Act of 1964 on constitutional grounds: Goldwater supported the Arizona NAACP and was involved in desegregating the Arizona National Guard. Nationally, he supported the Civil Rights Acts of 1957 and 1960 and the constitutional amendment banning the poll tax. However, he opposed the much more comprehensive Civil Rights Act of 1964; he argued that, among other things, it unconstitutionally extended the federal government's commerce power to private citizens in its drive to "legislate morality" and restrict the rights of employers. - Wikipedia

Does that sound like the work of a racist?

As far as Reagan is concerned, how was he involved in McCarthyism? Joe McCarthy was a drunk and a demagogue who really did not care if he identified communists or not. The term "McCarthyism" means unsubstantiated and unfounded charges of communist sympathies, of which Joseph McCarthy was guilty. When was Reagan guilty of that?

I had two opportunities to vote for Ronald Reagan and did not do it either time, so I am not a Reagan disciple. But I have to protest the smarmy McCarthy-ite tactics of Krugman here. Neil, you're better than that. You ought to be suspicious when someone such as Krugman always is on the side of the angels and those he opposes, both living and dead, are always the blackest devils.

I'm not fully convinced of the "Reagan is a racist" argument.

Reagan did participate in the creation of The Hollywood Blacklist. Reagan may not have been directly linked to McCarthy but he did join in the unbalanced anti-communism of the time (such as the development of HUAC).

Actually I forgot to mention that the quote in this post about Reagan was not actually made by Krugman but by Bob Herbert, another NYT columnist.

I need to point out, however, that I have a great deal of respect for someone like Krugman who spoke out against Bush when he had massive approval ratings. He's also an economist and is very useful in debunking the myth that the market can do everything properly. Like me, Krugman I think has begun to work out that the market is both very good and very bad, and that government should step in those areas where the market fails. This isn't communism, but more like the Radical Centre espoused by Tony Blair, Bill Clinton and Paul Keating (former Australian PM).

Did you read the Wikipedia article and the linked transcript of Reagan's testimony before the Committee? If so, might I suggest you read them again?

Where do either of those indicate he was involved in creating the blacklist? His testimony seemed pretty mundane, and the blacklist is not mentioned. In fact, his comments at the end could be inferred that he was not in favor of a blacklist.

Are you really giving him credit for creating HUAC? If, as a B-list cowboy actor and not a member of Congress, he was really able to do that, then those many leftists who despise him should rethink their refusal to give him any credit for the fall of the USSR. He obviously must have had superpowers.

He's also an economist and is very useful in debunking the myth that the market can do everything properly.

My objection to Krugman is his disingenuousity and hypocrisy. When he writes on what he knows - economics - he is often illuminating and interesting. When he writes on nearly every other subject, he's not. Even one of his former editors at the NY Times admitted that Krugman played fast and loose with facts at times.

The latest Nobel laureates in economics have many years of research on the subject of when markets are appropriate and when they aren't. I am not familiar with their work, but I intend to try to get my hands on it and read some of it.

My own view is this: I am completely open to the possibility of market failure. But my standard is high. Way too many people (mostly on the left) see market failure behind every result that does not meet their liking.

Everyone does not make above average wages? Market failure.

Some people are forced to drive Hyundais while others drive Ferraris? Market failure.

My brilliance is not sufficiently recognized by employers? Market failure.

I'm guessing you believe that the US health system is a crystal clear case of market failure. I read Krugman the other day and he said as much. But you know what? He knows better.

He will have to live with his own conscience (if he has one). I hope you will consider other views.