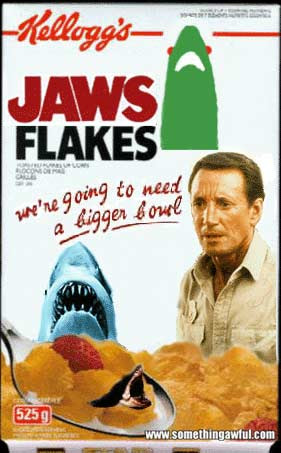 This photoshopped image has been shamelessly stolen from Something Awful.
Posted by One Salient Oversight at 18:36

The opening credits of "Flying High" with the Jaws music had me rolling on the floor. As did Fawlty Towers appearing in your current vote - Python is of course a ground broker so must be there. YES M and PM were so good. Some Mothers was so infuriating.

A lot of the other shows were good but hardly in same league. Blackadder almost up there - the initial episodes being satire on Shakespeare's Richard III had me but I thought the other series quite silly and we ned that general from Python to drum them off. of course Tony Richardson and Hugh Laurie were very funny. Some time ago I watched "House" for the first time and it was that night in bed before I woke up that the pompous know it all was Hugh having a great laugh as he still is.