Al Mohler is a Freak 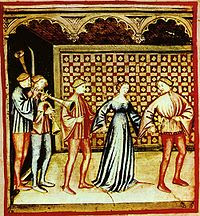 From the department of this-is-too-funny:

"Freak dancing" is well known throughout the nation, and it involves what can only be described as "sexually charged" physical contact and movement. But many of the kids in Argyle were "disgusted" that freak dancing was banned at the homecoming dance, so they left. That might be fairly easy to understand. After all, adolescents are expected to exhibit adolescent patterns of misbehavior. What makes this story so interesting is that so many parents responded by joining their adolescents in immature response. In fact, their protest of the superintendent's policy is shocking.

Remember that Al Mohler is a Baptist, which means that "Freak Dancing" is the inevitable result of sex before marriage.

Look - all dancing has a level of sexual suggestion to it. Is Al going to make up rules as to how far these kiddies (ie anyone under the age of 30) are allowed to dance with one another? We don't want all this sex before marriage to create the problem of "Freak Dancing" now do we?

But then, of course, Al is hardly the sort of person to be reading "The Onion". Click here to understand what I mean.
Posted by One Salient Oversight at 13:37