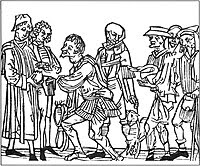 Over the years I have come up with some crazy ideas and schemes. Every time I do, however, I discover that someone has been there first. I came up with the idea of a Democratic system of government that selects politicians randomly and without the need for political parties and elections, but then discovered that someone else had come up with it first. I invented the Zero Unemployment Economic System but then found out that I had simply come up with a Socialist version of Milton Friedman's Negative Income Tax theory. As yet I have yet to find anyone advocating my idea for Absolute Price Stability before I did.

Now I've come up with something else - the Zero Tax Economic System. It's been running around in my mind for about 5-6 years now, but the reason why I never published anything about it was simply because I had no faith that it would work. To be honest with you, I'm still not certain that it would work, so if you do find holes in it I won't get too embarrassed.

The reason I'm publishing it now is due to some conversations I've had with a friend over the nature of the Monetary system and recent stuff I have read about SIMPOL and their ideas of monetary reform. As a result of my thinking through this, I have come to understand a bit more about Fractional-reserve Banking, as well as the Reserve requirement that has sometimes been used as part of a central bank's Open market operations.

In a nutshell, here is my idea:Simple isn't it? In years gone by it was my understanding that when a central bank intervened in the marketplace it either issued bonds or paid them back. I wasn't really aware of the Reserve requirement - the percentage of deposits that banks must hold at the central bank - or any other tools of monetary policy.

Of course the idea of a government simply printing the money it needs without worrying about tax intake is hardly new. Everyone with a smidgeon of economic understanding knows that this sort of activity leads to the "H" word - Hyperinflation. Suddenly everyone then becomes an expert in the history of Weimar Germany (although Zimbabwe is another good place to start these days).

What I'm suggesting, though, won't result in hyperinflation. This is because I still have faith in the ability of Monetary policy and Central banks to recognise inflation and to act accordingly (except, most saliently, the current US Federal Reserve Bank board, who obviously need Paul Volcker to be chairman again). The complete removal of all forms of taxation, followed by wholesale money creation, would inject massive amounts of money into the economy. But for every dollar, or pound or Euro or Yuan that is created, the central bank can remove by increasing the Reserve requirement for bank deposits. This balancing act will remove the hyperinflationary effect.

I can see three benefits of this system.

The first benefit is efficiency. Without the need to collect tax, entire government departments can be eliminated, removing the need for a massive bureaucracy to maintain the government's tax revenue. Instead, the government simply gets the money created by the central bank. This efficiency would also be felt in the private sector, with no tax accountants and lawyers required by companies and corporations. Obviously some level of unemployment would occur as accountants and lawyers and bean counters look for work, but that would be easily solved over time. With less time spent on adhering to tax laws and finding loopholes, the economy will benefit.

The second benefit is that government revenue is indirectly raised from the broadest possible base. This proposed system does not really create money from nothing - the raising of the Reserve requirement of bank deposits balances out the seigniorage. This means, in effect, that the tax burden is still there - it's just that it has transferred into the marketplace in the form of higher market interest rates, which affects the entire economy.

Since I've had other economic ideas, how would this idea fit in with my other models - the Zero Unemployment Economic System (ZUES) and Absolute Price Stability?

With ZUES, all that would happen is that each employed person would continue to receive two incomes - one income from his/her employer (which has no minimum wage requirements) and the universal income from the government that all people would receive equally (which is a form of negative income tax). But rather than this universal income being sourced from higher levels of tax revenue, the income is merely created by seigniorage, with the amount determined by formula. The central bank then modifies the Reserve requirement to control inflation.

With Absolute Price Stability, the Central bank would set the Reserve requirement at such a level as to keep inflation at zero. Moreover, I would argue that banks should not get any interest paid at all on these reserves by the central bank which, in a zero-inflation environment, means that banks would neither directly gain nor directly lose from having to keep money under the central bank bed.

Update 22 January 2007:
I have just discovered that a lengthy discussion of this article occurred at Megan McArdle's page at The Atlantic.com.
Posted by One Salient Oversight at 13:58

Do we really want the rate of inflation to equal zero? How do we account for the many improvements due to technology, etc. which have historically resulted in lower costs as productivity increases? Keeping inflation at zero harms the most likely beneficiaries of productivity: the poor and those on fixed incomes, doesn't it? In this case, a zero inflation rate is actually an inflationary policy.

I'll grant you your low view of the Fed, but even if they were to your liking, do you really think your plan is viable in a country the size of the US?

My idea for absolute price stability (APS) is for the consumer price index (CPI) to remain at zero, continually. That is, neither inflation nor deflation. Of course the CPI will move into inflationary or deflationary territory, which is then acted upon by the central bank via monetary policy.

What absolute price stability does is keep money's value at a constant. In an economy that runs APS, one dollar is worth exactly the same as time goes by.

In an inflationary economy - even ones that have low levels of inflation (1-4% annual) - money becomes less valuable.

Any growth in productivity and the resultant lower costs of goods and services will always have a deflationary effect. If productivity grows and this causes some deflation, then a central bank can simply use its open market operations to increase the money supply and keep prices stable.

Those on fixed incomes are more likely to benefit than suffer. In an inflationary economy, a fixed income cannot purchase the same amount of goods and services as time goes by. If prices remain completely stable, then a person on a fixed income has the same purchasing power on a continual basis.

Trouble is you in an indirect way voted for an economic conservative.

So in essence do you want to bring back the assignants

When our current plastic notes came in they were called Mickey Mouse.

A work mate way back in UK went to France and brought up on assignants. One of the other guys saw his ad and wrote him a letter saying he was a collector and he was off to France again for more. There must have been zillions of that paper around even 160 years after they were printed.


What countries have APS?

What countries have APS?

The US Federal Reserve does not have inflation targets but, in practice, has acted to cool down inflation once it goes past 3%.

Japan has a zero inflation economy at the moment, but that is more to do with circumstances rather than deliberate design.

BTW, the theory of Absolute Price Stability (APS) is, as far as I know, my own creation.

Tell me, in fractional reserve banking, what happens to the money left in the reserve bank? If the government is printing money for itself and doing stuff with it, and the reserve bank keeps raising the % of the money it needs in it's "reserves"... where does that money go? How much paper work would it create having to keep track of all these fractional deposits? The current money creation system is bad enough at forcing growth in our policy makers who are all terrified of what might happen if the economy stopped growing. (Because they know the whole house of cards will tumble down if all that mortgaged into existence money doesn't actually represent anything.) Do we really want them creating MORE money, faster?

Those aren't the only options. Remember - I do not believe that economic decline is not inflationary.

Tell me, in fractional reserve banking, what happens to the money left in the reserve bank?

It sits there and does nothing. I'm even pointing out that the reserve bank doesn't even need to pay interest on it.

How much paper work would it create having to keep track of all these fractional deposits?

Well, apart from the use of things called computers, the removal of money from the economy in this fashion prevents the fractional system of modern banking from creating too much money.

Remember, in fractional banking, a $1000 deposit can eventually result in $4570.50 worth of money sloshing around the economy. This is at a fractional rate of 20%.

I did some quick calculations. If the fractional rate was increased to 30%. Then the amount of money produced results in $3267.44.

So when the Central Bank increases its reserve requirement, every dollar it takes (and does nothing with) results in 3-4 dollars that is not created by the banking system as a result.

Remember - I do not believe that economic decline is not inflationary.

I do not believe that economic decline IS inflationary.

If prices remain completely stable, then a person on a fixed income has the same purchasing power on a continual basis.
If income disparity and the widening gap between have's and have nots concerns you, then I don't understand why you endorse a program that guarantees that these folks will fall behind vis a vis those not on fixed incomes.

I'm not understanding you Beamer. Try to explain the problem in more detail.

My comment was based on the understanding that the only things that can cause general (systemic) price changes are changes in 1) the demand for, and/or 2) the supply of, money.

An increased supply of goods (due, for example, to productivity gains), will increase the demand for money and and tend to lower prices (assuming a fixed supply of money).

An increase in the purchasing power of money causes demand for money to be lower since each $ is more effective. The converse also holds.

Purchasing power then, will remain constant only when the supply of, and demand for, money are in equilibrium.

While increasing the money supply as you've described will cause prices to rise, the timing of those changes are unpredictable (more chaos theory!). In addition, the effectiveness of capital investments are also unpredictable and non-linear. Therefore, it is extremely unlikely that purchasing power can be held constant since the equilibrium point where supply and demand of $ is unknowable.

History has shown us without exception that governments who attempt to manipulate the money supply either 1) overinflate and then overcorrect, or 2) overinflate and, fearing the fallout of a recession, continue to inflate.

Poor people and those on fixed incomes have a limited ability to adjust their cash balances and are doomed to fall behind those who do have that ability.

Doh! Typo: Therefore, it is extremely unlikely that purchasing power can be held constant since the equilibrium point where supply and demand of $ is unknowable.

SHOULD READ: Therefore, it is extremely unlikely that purchasing power can be held constant since the point where supply and demand of $ is in equilibrium is unknowable.

I regret the error.