Cheap Solar on its way 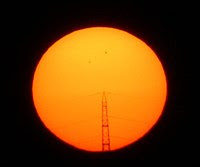 From the department of technological-cornucopia:

While many photovoltaic start-up companies are concentrating on increasing the efficiency with which their systems convert sunlight, Nanosolar has focused on lowering the manufacturing cost. Its process is akin to a large printing press, rather than the usual semiconductor manufacturing techniques that deposit thin films on silicon wafers.

Nanosolar’s founder and chief executive, Martin Roscheisen, claims to be the first solar panel manufacturer to be able to profitably sell solar panels for less than $1 a watt. That is the price at which solar energy becomes less expensive than coal.

According to the Energy Department, building a new coal plant costs about $2.1 a watt, plus the cost of fuel and emissions, he said.

The first Nanosolar panels are destined for a one-megawatt solar plant to be installed in Germany on a former landfill owned by a waste management company. The plant, being developed by Beck Energy, is expected to initially supply electrical power for about 400 homes.

Even if the costs are 50% higher than coal ($3 per watt) it would still be competitive since many people wish to have completely green energy. But what happens when the sun goes down? What about all the baseload crap that semi-informed people seem to go on about. Click here.
Posted by One Salient Oversight at 15:14