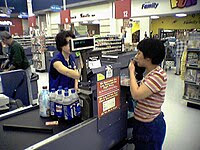 These are three examples of good customer service I have had recently.

On the weekend, my son lost his wallet at K-Mart. He came home very upset because he was going to use the money in it (about $10-$15) to buy some toys or cards or whatever. He had simply put the wallet down and forgot about it (he's only 7). I went to the customer service desk, asked them if they had any missing wallets handed in. They didn't, but asked me to leave my name and number in case they do find it (his details were not in it). A man standing behind me in the queue said "good luck!", meaning there was more chance of the Beatles reforming with cloned and quickly-aged copies of John Lennon and George Harrison than there was of my son's wallet being returned. Well, an hour ago K-Mart called. The wallet's been found. Not only did they keep my slip of paper with my details, but someone remembered. And that was a day when the queue at the customer service counter was longer than the check-out queue.

Cricinfo is nice to me too - especially when I fill out their contact form. Of course there is the obligatory computer generated we-love-you-more-than-anything response. What I am continually amazed about, though, is that I have sent a couple of emails to Steven (of ask Steven) and Peter English, who both have replied personally. Moreover, I had an issue with the site recently (a dead link) and not only was I contacted immediately about it but the problem was solved almost immediately. I've even had a few Cricinfo staff write in response to some of the more crazy cricket ideas that I have sent them.

The final one is the Australian Bureau of Meteorology. Last year when I complained about a non-updated weather station, not only did I get a response straight away but when the page was finally updated I was emailed to let me know it was working again. This sort of service is not unheard of from the BOM - a teacher at Griffith told me last year that he once contacted the BOM about their weather radar page and suggested it would be best if the map of Australia showing the radar sites was at the top of the web page rather than at the bottom. They listened to him.

So remember, if you are dealing with customers - not even paying ones - you can make an impact.
Posted by One Salient Oversight at 16:43