Is Kevin Rudd the lead singer of U2? 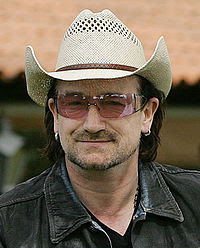 From the department of I-will-follow:

Australia will take on a highly ambitious and activist role on the international stage under the new Prime Minister, Kevin Rudd, who has unveiled a grand plan for uniting the world on climate change.

Heralding a significant shift in foreign policy from the Howard era, Mr Rudd - former diplomat and China expert - told the Herald yesterday he intended to use Australia's new position as a member of the Kyoto club to "bridge the gap" between developed and developing countries on future emissions controls.

In his first newspaper interview as Prime Minister, Mr Rudd admitted it was an enormous challenge but said Australia had a "national and international responsibility to the next generation" to do everything it could to counter the threat of climate change.

Mr Rudd will travel to Bali on Tuesday to join the UN conference on climate change, in what will be his first appearance on the world stage as Prime Minister.

High hopes indeed. Kevin Rudd not only wants to help change the world, he seems to want to do it Bono style. Of course there are some differences between Bono and Kevin. First of all, Kevin Rudd can't sing while Bono... can't really sing either but at least he makes a career out of it. Secondly, Kevin is married to a multimillionaire businesswoman, while Bono is a multimillionaire who sometimes dresses like a woman. Thirdly, Kevin Rudd has yet to be interviewed naked, while Bono... well let's just leave that. Fourthly, Kevin hasn't really achieved anything substantial yet in the world of politics while Bono... um.

Hey, it has just occurred to me that I have never seen Bono or Kevin Rudd in the same place before. When I saw U2 in 1989, I could've sworn that the guy out the front was speaking Mandarin and wearing emo glasses...
Posted by One Salient Oversight at 09:26