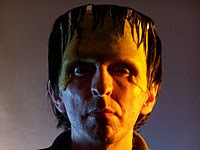 Aiden came up to me after church this morning and said "Dad! I know what the wise men gave Jesus!".

"Okay, what were they?" says me

And he was serious too...

Reminds me also of when I was a lad I was in 5th Grade (about 10 years old) and was singing in the school spectacular at the Opera House. We sang this song which included the phrase "Hosanna in excelsis".

Not knowing much about the Bible at the time, and knowing that this was a somewhat religious song, I always wondered who this Hosanna guy was and where this place called Excelsis was that he was in.
Posted by One Salient Oversight at 19:59