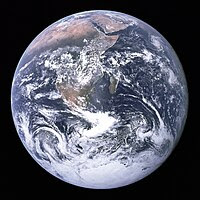 The 8.2 kiloyear event is the term that climatologists have adopted for a sudden decrease in global temperatures that occurred approximately 8200 years before the present, or c. 6200 BCE, and which lasted for the next two to four centuries. Milder than the Younger Dryas cold spell that preceded it, but more severe than the Little Ice Age that would follow, the 8.2 kiloyear cooling was a significant exception to general trends of the Holocene climatic optimum.

The strongest evidence for the event comes from the North Atlantic region; the disruption in climate shows clearly in Greenland ice cores and in sedimentary and other records of the temporal and tropical North Atlantic. It is less evident in ice cores from Antarctica and in South American indices. The effects of the cold snap were global, however, most notably in changes in sea level during the relevant era.

The cooling event of 6200 BCE may have been caused by a large meltwater pulse from the shrinking but still massive Laurentide ice sheet of northeastern North America—most likely when the glacial Lake Ojibway suddenly drained into the North Atlantic Ocean. (The same type of action produced the Missoula floods that created the Channeled scablands of the Columbia River basin.) The meltwater pulse adversely affected the Gulf Stream and the global thermohaline circulation regulating the Earth's climate regime (an instance of warming causing cooling). Cooling occurred by 5 to 6 °C (9 to 11 °F) in the temperate zones, and 3 °C (5 °F) in the tropics: "cores drilled into an ancient coral reef in Indonesia show an abrupt sea surface cooling of about 3 degrees Centigrade." Cooler and drier conditions prevailed, again as in the Younger Dryas though less extreme. Yet the changes were severe enough to impact the earliest settled human communities: the first phase of Catal Huyuk ended during the 8.2 kiloyear event. The site was abandoned and not re-occupied until about 5 centuries later, when climate conditions had improved markedly.

Drier conditions were notable in North Africa, while East Africa suffered five centuries of general drought. The initial meltwater pulse raised sea levels by as much as 1.2 meters (4 ft), but the cooling that followed allowed a glacial advance and consequent marine regression. After 2 centuries, or by 8000 ybp (6000 BCE), global sea level had dropped by 14 meters (40 ft.). After that point, however, milder climate conditions re-asserted themselves; by 7800 ybp (5800 BCE) the global climate returned to the clement conditions that prevailed during the Holocene climatic optimum.

Yeah okay I copied and pasted this from Wikipedia, which means that I have to point out that the text above is available under the GNU Free Documentation Licence.

The important bit to note is the part I underlined. The result of the meltwater pulse was simultaneously a rise in sea levels of 1.2 metres and a global cooling effect. The reason is obvious - the cold water from Lake Ojibway lowered sea temperatures enough to cause global cooling.

The reason why Lake Ojibway drained into the ocean is probably the result of normal global warming - ie, the ice dam that kept the waters of Lake Ojibway above sea level eventually melted enough for it to disintegrate and caused a massive influx of cold, fresh water into the Atlantic Ocean. What we need to realise is that, although this event caused a "cold snap" for many centuries, eventually temperatures warmed up again.

What can we learn from the 8.2 kiloyear event?

If predictions of the melting of ice sheets are correct, then the water trapped as ice above sea level (in places like Greenland and Antarctica) will eventually melt and mix with seawater. Whether this melting will be gradual or sudden, it means that some cooling effect from the meltwater ice will be experienced at the same time as sea level rise. Thus if we end up in a situation where sea levels do rise as Greenland Ice sheets begin to melt, we will probably experience some level of global cooling and maybe even a drop in sea levels over time. Nevertheless, the already high levels of CO2 in the atmosphere will continue to act as a warming affect, which means that the length of the cooling will only be temporary.
Posted by One Salient Oversight at 23:01

The reason is obvious - the cold water from Lake Ojibway lowered sea temperatures enough to cause global cooling.

No, the real killer is not ocean temperature but ocean salinity. As the article says: "The meltwater pulse adversely affected the Gulf Stream and the global thermohaline circulation regulating the Earth's climate regime (an instance of warming causing cooling)." But even better is the Wiki on the shutdown of the thermohaline, which explains the process by which the ocean circulation could stop due to too much freshwater stopping the sinking of heavier saltwater. The concentrated saltwater up north is the "pump" that keeps the ocean moving.

But even this on it's own would not bring about GLOBAL cooling. What then has to occur is that the Northern Hemisphere does not receive the warmth of the thermohaline circulation, and so longer winters occcur. Heat from the equator is not dispersed in the North as it usually is by the ocean, and so a few runaway feedbacks begin to get moving. Glaciers grow, the size of Arctic ice cover grows, and longer winters up north generally can create more snowclouds which in turn keeps the warming sunlight out. Changed albedo's and less sunlight in the Northern Hemisphere finally create runaway cooling (to a point) and we finally see a change in GLOBAL climate.

So it's not because some cold on the land ended up in the sea. Climate changes are to do with much larger energy shifts than that, and seem to be mainly about changing how much sunlight is received into the Earth's climate, or is reflected back into space.