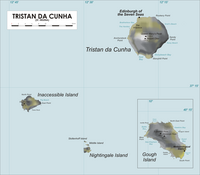 From the department of conspiracy theories:

Britons living in what is described as the remotest community in the world are seeking help after the outbreak of an acute virus.

Many of the 271 British citizens living on the volcanic island of Tristan da Cunha, in the south Atlantic, have developed severe breathing problems.

They need to ensure that their current medical supplies do not run out.

An international operation to provide help is being led by the Foreign and Commonwealth Office.

BBC world affairs correspondent Mike Wooldridge said the islanders were being affected by what appears to be an outbreak of viral-inducted asthma, which causes severe breathing problems.

Tristan da Cunha's one resident doctor, a South African, has issued an appeal for medical supplies.

The volcanic island has no airstrip, making getting medicines there difficult.

Tristan da Cunha is a small island group in the South Atlantic. It's quite a bit bigger than places like Pitcairn but much smaller than The Falklands.

It interests me that a severe 'flu should afflict the island. The influenza virus is spread from human to human but will never float thousands of miles in the air - not alive, anyway. Generally, people who live in remote places do not suffer the same viral problems as people who live in built up areas like cities. With no airstrip, Tristan de Cunha's population would be isolated from most viral outbreaks around the world.

Of course, with 271 people on the island, someone could have easily turned up with influenza some years ago, and the virus could have been mutating through a very small group of people before coming to its current virulence. I've never heard of a 'flu mutating amongst such a small amount of people - but then again I'm hardly an expert in microbiology.

The Conspiracy Theory side of my brain has been stimulated by this, though. What if a biological weapon was released on the island to test its effects? With no airstrip and and its remoteness, a deadly viral outbreak on Tristan de Cunha would spread no further than its shoreline. How would it have been released? Simple - a submarine could have sailed there from a nation with access to biological weapons (eg USA, Russia, China, Western European nations), and a person could have gone ashore and "released it" somehow.

Yeah I know... I've seen too many movies. Hopefully this is just a virus that occurred naturally.

But you never know...
Update:
The hospital on the island has a website here. "The situation is under control and there is no emergency". Heh, they would say that wouldn't they?
Posted by One Salient Oversight at 08:57

Didn't some scientist Hoyle? theorise that the 1919 Flu was "seeded" across the planet by the comet of that year. This was not crackpot stuff.

How is the volcano? Does it omit fumes?

The most likely route of infection would probably be by migratory birds. Tristan da Cunha is the breeding ground for Shearwaters. If you remember this July there was a Shearwater die off (Florida, I think.)

It would be wise to check for bird flu or other avian carried virus.

...and of course, air travel can always result in viruses being brought to countries around the globe.
Thank you,
Patricia Doyle, PhD