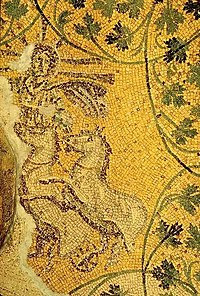 There's no doubt that the religious festival of Christmas has pagan origins.

No, it's not a result of Saturnalia being Christianised by the early church (though it probably did influence Christmas in some respect, such as the exchange of gifts), but rather it is the inevitable syncretism of Christian and pagan beliefs.

Christianity grew in the Roman Empire much more slowly than Kudzu, but, once established, it was impossible to eliminate. From being the butt of persecution in the early days (Nero, Domition, the lions and all that), Christianity was inevitable thrust into the mainstream of Roman politics after the conversion of Emperor Constantine and the eventual law under Theodosius that made Christianity the official state religion (the same law made traditional paganism illegal).

When two religions co-exist, there is no doubt that elements of one would end up in elements of another. It was in 274 AD - before Christianity was fully accepted into the Roman empire - that emperor Aurelian instituted the worship of the Sun God. The idea was simple - the Sun God essentially became the main pagan deity at the time and was probably seen by many pagans as the god above all gods, which, in turn, would have encouraged some form of monotheistic understanding amongst pagans. The Sun God could not be conquered, even in the midst of winter.

And that, of course, leads us to the winter solstice. At the winter solstice, the day is the shortest of the year in terms of sunlight. It was, in many ways, the weakest the sun gets on any day of the year. But still the sun shines. Even when it is diminished, the sun is "never conquered".

Back in those days, the Winter Solstice was celebrated on December 25th. To encourage worship of the Sun God, Roman paganism held a festival on that day. This festival increased in importance as the years went by.

When Theodosius made Christianity the state religion in 391 AD, the annual Winter Solstice celebration was not halted. Despite it being a pagan festival, and despite paganism now being outlawed, the December 25th festival continued to be celebrated. Why? Well, it was because the original deity - the God of the Sun - had been replaced with Christ. The pagan festival had been slowly Christianised as Christianity became more prevalent in the Roman Empire.

The yellowy image you see above is an example of this syncretism. The image is a mixture of paganism and Christianity and was made during the 4th century AD (it is located under St. Peter's Basilica ). The image is of the Sun God, unconquered as he rises in the sky. Yet the face of the God is that of Jesus Christ.

Of course, many things have been added to our understanding of Christmas over the years, such as Santa and sleighs and all that nonsense. It isn't wrong for us as Christians to celebrate Christ's birth, since it is one of the most wonderful events in all of history. But as we celebrate this Christmas, we must remember that there is nothing really at the "heart" of Christmas that is somehow originally Christian. Even though the birth of Christ has been at the centre of Christmas celebrations for over a millennia, we can't forget its pagan origins. It's certainly nothing we should "fight" over, it isn't something that we should feel we "own", and it isn't something that unbelievers can't interpret for their own sake.
Posted by Neil Cameron (One Salient Oversight) at 12:00

I'm going to be busy the next few days and taking a break from OSO, but I do want to take a second to wish all here a very Merry Christmas and a Happy New Year.

Even if you don't ordinarily keep a "traditional" Christmas, and despite all the mythical baggage, celebrate that Singular Event: the birth of a child from a virgin in Bethlehem 2000 years ago.

Without that Child, my life would be infinitely poorer.

From the Beamer family to our friends in Oz.