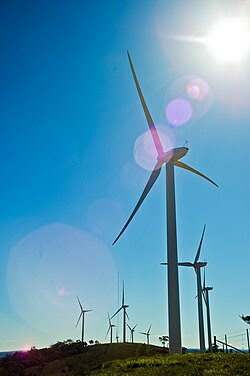 Wind energy provided more than half of Spain's total electricity needs for several hours over the weekend as the country set a new national record for wind-generated power.

With high winds gusting across much of the country, Spain's huge network of windfarms jointly poured the equivalent of 11 nuclear power stations' worth of electricity into the national grid.

At one stage on Sunday morning, the country's wind farms were able to cover 53% of total electricity demand – a new record in a country that boasts the world's third largest array of wind turbines, after the United States and Germany.

For more than five hours on Sunday morning output from wind power was providing more than half of the electricity being used. At their peak, wind farms were generating 11.5 gigawatts, or two-thirds of their theoretical maximum capacity of almost 18GW.

The massive output of wind turbines meant the Spanish grid had more electricity than was needed over the weekend. In previous years similar weather has forced windfarms to turn turbines off but now the spare electricity is exported or used by hydroelectric plants to pump water back into their dams — effectively storing the electricity for future use.

That last sentence is important - energy was stored. Although wind and solar energy is dependent upon atmospheric conditions, if enough electricity is generated then excess power can be stored. Pumped-storage hydroelectricity is a mature technology that has been used all over the world for decades but is dependent upon good locations for a hydroelectric dam. Other energy storage solutions include Flywheel energy storage, (in which excess energy is turned into mechanical energy which then drives a generator when energy is needed) Hydrogen storage (in which excess energy is used to turn water into hydrogen and oxygen through electrolysis, which is then turned back into electricity via a fuel cell) and Thermal Energy Storage (in which molten salt is heated directly by the sun and the heat used to drive a steam turbine during both day time and night time). None of these solutions prevents a loss of energy, but neither does the pumped-storage hydroelectricity that we have used for decades.

The more renewable energy a grid takes on, the greater will be the need to develop energy storage for the grid.
Posted by One Salient Oversight at 12:21