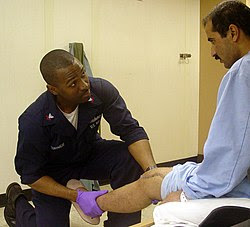 The signs are there that the US economy is beginning to recover. The last quarter GDP came out at 3.5% - which, though it might end up being revised downwards over the next few months, does indicate some level of economic growth. Moreover, other signals, such as manufacturing increases, seem to indicate a potential recovery.

I can see two possibilities before us.

The first possibility is that growth will continue over the next few years but the rate of growth will be low. Any form of Keynesian spending of the sort practised by Obama and congress will result in an economic slump over the medium term. The hope, of course, is that the spending will stimulate the economy enough for it to be self-sustaining and thus end up paying off the debt accrued by the stimulus in the first place. Given the sheer level of US public debt (which is approaching my predicted 55% of GDP), I doubt that the benefits will end up outweighing the losses. Yet the US economy has had the ability to surprise in the past so I can't discount the idea that GDP will return to growth over the next 4-6 quarters. What I am certain of is that such growth, if it occurs, will be hobbled. I can't see anything beyond 2% being achieved. In terms of unemployment, such hobbled growth will result in only a slight improvement over the current situation, which is, of course, terrible.

The second possibility is that the 3.5% growth is merely a blip on the way further downwards. This means that Q1 2009 and beyond is likely to see a return to recessionary conditions. One of my predictions for 2009 was for the US Dollar to drop below 60 on the US Dollar Index which, in hindsight, appears to be too pessimistic. Nevertheless, the fall in the US Dollar this year has been the steepest on record and there seems to be little evidence that it has reached the bottom. As I have pointed out over the years, with bond yields too low and business profits rare, why would investors wish to invest in America? The US is still ripe for capital flight given the superior conditions elsewhere (or at least "less bad" conditions). The US Dollar cannot continue to fall without some inflationary pressure and, when it comes, will require increasing interest rates in an already poor economic situation (increasing interest rates always dampens economic growth).

What I can't see is any possibility of the US returning to consistent 3-4% GDP growth. The damage caused by runaway public spending since Reagan, a badly unregulated financial market and cheap borrowing cannot be ignored. There is a time for the US to reap what it has sown, and the harvest has only just begun.
Posted by One Salient Oversight at 09:40

Labels: Economics, US Dollar, US Economy