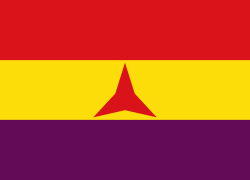 One of the more unedifying sights in the last twelve months has been American conservatives branding Obama as a Nazi, a Fascist and a Communist. Those of us who know something about history naturally scoff at these things, yet an entire section of the American population seems to think that the three isms - Nazism, Fascism and Communism - are pretty much the same thing. Strangely enough this realisation has only come about in the last few years - due mainly I would argue to a political discourse so crass that labelling your opponents as "Fascist" or "Nazi" or "Communist" or "Socialist" has become the norm (a process which I think will result in the sort of conservative violence already experienced at Oklahoma City and the Atlanta Olympics, both of which were perpetrated by government-hating conservatives).

Fascism and communism have been studied for decades and, while the two share similarities, they are different to one another. Fascism always places political power into the hands of a dictator. By contrast, Communism is run more by a committee. Both are non-democratic. When it comes to relationships with business, the two are very different. Fascism has always been supported by a nation's rich and powerful. Industrialists and business owners were supportive of the Nazi rise to power, they were supportive of Mussolini in Italy and they were supportive of Franco in Spain. Communism, of course, opposed the wealthy class and any form of private enterprise. The Soviet Union gradually removed all forms of private enterprise from Russia and replaced it with government owned and operated factories and farms. Private property under fascism was respected (and the greater the price of the property, the more respect it gave to the owner), whilst under communism it was relegated only to personal belongings (stealing was, after all, an offence in the USSR).

The biggest difference between Fascism and Communism was seen during the Spanish Civil War. Franco and the nationalists were supported heavily by Nazi Germany and Fascist Italy during this war. Those who joined up on the anti-Fascist side and who supported resistance against the Nationalists were called the Republicans. Who sent guns and troops to fight against the Nationalists? One nation was Mexico, while international brigades (the flag of which is to your upper right) existed for any anti-Fascist from overseas who wished to fight for freedom. Oh, did I mention that the Soviet Union was right behind the anti-Fascist effort too? Hardly something a fascist government would do. But then again, the USSR was not fascist.

Communism is not Fascism. The two are very different. But they do share one thing: they have oppressed people. And Obama is neither a Fascist or a Communist - he's just a liberal politician.
Posted by One Salient Oversight at 13:59

I think that fascism can be better summarized as, "Might makes right."

Socialism as, "No private ownership or control of capital."

Communism (Marxian, not Leninism) as, "No ownership of anything. Stuff just happens."

Obviously, there are varying degrees of each and overlap between them.

None of those descriptions fits a historical examination of the isms you describe.

* Registered Republican.
* Membership of the NRA.
* Quote: "More taxes are always the answer to government mismanagement"
* Quote: "I believe we are slowly turning into a socialist government. The government is continually growing bigger and more powerful and the people need to prepare to defend themselves against government control."
* Quote: "Those who betray or subvert the Constitution are guilty of sedition and/or treason, are domestic enemies and should and will be punished accordingly."

Excuse me, I thought you were addressing fascism, communism and socialism.

I wasn't aware you were trying to smear all conservatives because of Timothy McVeigh's voter registration. Count me out.

Being a registered Republican didn't help him out, though, did it? He was executed despite the all-encompassing, total power that the GOP holds in this country.

My definitions are not textbook, obviously, but I think they are pretty accurate as to capturing the essence of each -ism.

I don't subscribe to McVeigh's last two, but I am at a loss to think of any federal program that was ever scaled back or canceled because it proved to be mismanaged.

Does that make me a McVeigh disciple?

McVeigh I can only assume was not well

Nazism = Our Leader is wonderful - and those people he is waving his finger at should be destroyed.

Fascism = Lets have a leader

Socialism = take it over

Would Communism have become such a problem if someone other than Stalin had been in power? The Spanish Civil War was a turning point in attitudes to Soviet Union well at least in UK - as with George Orwell - mainly due to Stalin in the end not backing the "cause".

I am reading Geoffrey Robertson "The Regicide Brief" the trial of Charles I during the English Civil War. Geoffrey says during those days Democrat was a term of abuse

Now back to Obama .... he seems to have trouble getting things passed but he talks well

Things are not quite as simple as you point out. Have you read Orwell on the fluidity of the term "fascist"? See http://orwell.ru/library/articles/As_I_Please/english/efasc

If on the other hand you're coming from the position of describing the system of governmental organisation or the relationship of those in power to industrialists then yes of course fascism and communism are quite different. The all important question is whether those differences *matter* in the scheme of things.

By the way, Neil: You knew that Martin Luther King, Jr. was a registered Republican didn't you?

And that he was shot by a Democrat?

We could play this all week, but it is fruitless. In this country, anyway, voter registration indicates a little of something but not a whole lot of anything.

In the mid 1960s, the ideologies of America's two parties began to shift.

Because the Democrats were essential in enforcing civil rights legislation upon the southern states, these same states eventually moved towards the Republican party.

So prior to 1960, the Democrats were very conservative. They lost their Southern base and now the south is a Republican stronghold.

McVeigh registered himself as a Republican whilst the Republicans were conservative.

So while it is important to realise that both parties have elements of conservatism and progressivism, one party is currently more dominant than the other. And that changed during the time MLK was around.

MLK was a progressive who was shot by a conservative.

Your inconsistencies are impossible to keep up with.

Was McVeigh a Conservative or not?

Like I said originally, he was a fascist. His collaboration and sympathies with the Aryan Nation people is a dead giveaway.