AGW and the Cru Hack 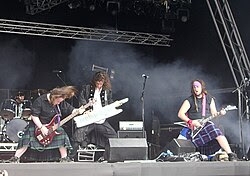 AGW and the Cru hack sounds like a really bad band, hence the picture. Actually it's got nothing to do with music, so sorry for misleading you!

AGW is, of course, "Anthropogenic Global Warming". CRU is short for "Climatic Research Unit", specifically the one at the University of East Anglia. And "hack", in this case, means "to devise or modify (a computer program), usually skillfully".

What it all adds up to is that hackers have broken into the CRU server, stolen a whole heap of information - specifically climate data and staff emails - and then sent copies of the 61mb file all over the internet for people to see. The BBC is reporting it here.

Although the hackers themselves have broken dozens of laws and making private emails is, shall we put it, unethical, the security breach may help to provide vital information for those interested in Global Warming - both the advocates (like myself) and the sceptics. What it will show is the pure, unadulterated and honest opinions of those who work for an organisation that promotes one side of climate science thinking. It is a snapshot - warts and all - of what goes on in a scientific community that believes current global warming is caused by human activity.

Of course there will be plenty of dross. The emails will contain derisive opinions of Manchester United fans, discussions about what sort of Indian restaurant in Norwich provides the best Korma, the Heydon bed and breakfast booking for two research students conducting a secret affair and whether or not "New Moon" will be a good film. But what it will also provide (hopefully) is evidence as to whether data is ignored or manipulated or not, and whether there is some sort of shadowy conspiracy going on.

RealClimate, the blog I go to on a daily basis to read about Climate Science, has this to say about the CRU hack:

Since emails are normally intended to be private, people writing them are, shall we say, somewhat freer in expressing themselves than they would in a public statement. For instance, we are sure it comes as no shock to know that many scientists do not hold Steve McIntyre in high regard. Nor that a large group of them thought that the Soon and Baliunas (2003), Douglass et al (2008) or McClean et al (2009) papers were not very good (to say the least) and should not have been published. These sentiments have been made abundantly clear in the literature (though possibly less bluntly).

More interesting is what is not contained in the emails. There is no evidence of any worldwide conspiracy, no mention of George Soros nefariously funding climate research, no grand plan to ‘get rid of the MWP’, no admission that global warming is a hoax, no evidence of the falsifying of data, and no ‘marching orders’ from our socialist/communist/vegetarian overlords. The truly paranoid will put this down to the hackers also being in on the plot though.

Instead, there is a peek into how scientists actually interact and the conflicts show that the community is a far cry from the monolith that is sometimes imagined. People working constructively to improve joint publications; scientists who are friendly and agree on many of the big picture issues, disagreeing at times about details and engaging in ‘robust’ discussions; Scientists expressing frustration at the misrepresentation of their work in politicized arenas and complaining when media reports get it wrong; Scientists resenting the time they have to take out of their research to deal with over-hyped nonsense. None of this should be shocking.

It’s obvious that the noise-generating components of the blogosphere will generate a lot of noise about this. but it’s important to remember that science doesn’t work because people are polite at all times. Gravity isn’t a useful theory because Newton was a nice person. QED isn’t powerful because Feynman was respectful of other people around him. Science works because different groups go about trying to find the best approximations of the truth, and are generally very competitive about that. That the same scientists can still all agree on the wording of an IPCC chapter for instance is thus even more remarkable.

Linus' Law states "given enough eyeballs, all bugs are shallow", which in the context of software development means that open source coding is superior to closed source because its very openness and transparency ensures quality. While the CRU hack was certainly an invasion of privacy, it does allow us to view the "bugs" in this scientific community and determine whether or not their work is flawed. I await the results, and am reasonably confident that it will only bolster the case for those who believe in AGW.

If it doesn't, I'll start listening to Alestorm.

EDIT: 160mb of data. Sorry. Link also to The Guardian.
Posted by One Salient Oversight at 10:26

I read some of the emails.

1. Celebration at the death of an intellectual opponent.
2. Lame excuses about manipulation of data, justified essentially on, "fake but accurate" grounds.
3. Attempting to conspire against skeptics because the conspirators' data is not strong, and they don't want it publicized.
4. Discussions of how to avoid Freedom of Information Act requests.

My impression is that, just as many so-called skeptics suspected, many of the AGW folks have been making it up as they go along.