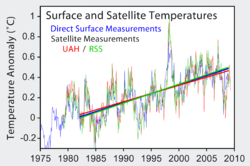 The American Physical Society, one of the largest and oldest scientific societies in the world, has an "official statement" regarding Global Warming. Here it is:

Emissions of greenhouse gases from human activities are changing the atmosphere in ways that affect the Earth's climate. Greenhouse gases include carbon dioxide as well as methane, nitrous oxide and other gases. They are emitted from fossil fuel combustion and a range of industrial and agricultural processes.

The evidence is incontrovertible: Global warming is occurring. If no mitigating actions are taken, significant disruptions in the Earth’s physical and ecological systems, social systems, security and human health are likely to occur. We must reduce emissions of greenhouse gases beginning now.

Because the complexity of the climate makes accurate prediction difficult, the APS urges an enhanced effort to understand the effects of human activity on the Earth’s climate, and to provide the technological options for meeting the climate challenge in the near and longer terms. The APS also urges governments, universities, national laboratories and its membership to support policies and actions that will reduce the emission of greenhouse gases.

Naturally the "denialists" (those who actively promote the view that global warming is either not occurring or is not man-made) have had an issue with the APS statement, so a number of APS members put a petition through to the APS council. The idea was to change the "official statement" (which I quoted above) to the following:

Greenhouse gas emissions, such as carbon dioxide, methane, and nitrous oxide, accompany human industrial and agricultural activity. While substantial concern has been expressed that emissions may cause significant climate change, measured or reconstructed temperature records indicate that 20th 21st century changes are neither exceptional nor persistent, and the historical and geological records show many periods warmer than today. In addition, there is an extensive scientific literature that examines beneficial effects of increased levels of carbon dioxide for both plants and animals.

Studies of a variety of natural processes, including ocean cycles and solar variability, indicate that they can account for variations in the Earth’s climate on the time scale of decades and centuries. Current climate models appear insufficiently reliable to properly account for natural and anthropogenic contributions to past climate change, much less project future climate.

The APS supports an objective scientific effort to understand the effects of all processes – natural and human --on the Earth’s climate and the biosphere’s response to climate change, and promotes technological options for meeting challenges of future climate changes, regardless of cause.

The Council of the American Physical Society has overwhelmingly rejected a proposal to replace the Society’s 2007 Statement on Climate Change with a version that raised doubts about global warming. The Council’s vote came after it received a report from a committee of eminent scientists who reviewed the existing statement in response to a petition submitted by a group of APS members.

What is interesting about the APS response are the final two sentences:

As a membership organization of more than 47,000 physicists, APS adheres to rigorous scientific standards in developing its statements. The Society is always open to review of its statements when significant numbers of its members request it to do so.

So how many APS members backed the denialist proposal? It seems that the number was around 160, which is a very small number when compared to the 46,840 members who didn't sign it. If denialists are to succeed in swaying scientific opinion, they need to get more scientists on their side. A proposal backed by 0.34% of APS members is hardly enough to matter. Moreover it seems to suggest that a consensus of scientific opinion exists within the APS that the current official statement is correct.

It is true that over 31,000 American scientists have signed a denialist petition, but since there are 2,157,300 scientists in the US (at least in 2001), that's still barely more than 1.4%. If a controversy did exist, you'd expect there to be more scientists up in arms about global warming. A good rule of thumb would be 20% - if 20% of scientists disagree with anthropogenic global warming then you could argue that a controversy does exist. I look forward to denialists getting 400,000 more signatures.
Posted by One Salient Oversight at 15:26