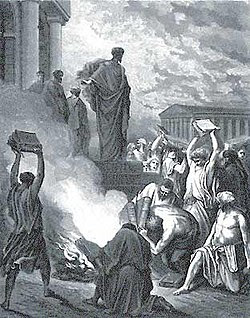 One way to check on the various beliefs of German Nazism is to look at the books they banned and/or burned. Thanks to someone at Reddit, a link has been provided to a site which translates the original German book-banning guidelines into English. What we find is interesting:
So what can we conclude?
Jonah Goldberg and Ben Stein need to check their sources.

Posted by One Salient Oversight at 13:13

I don't think this at all proves what you are trying to make it prove.

Oh and by the way "liberal" here does NOT equal "liberal" in the modern American sense of the word.

As for Liberal - you can read German so what does the original book burning document say about it?

It's not news that Nazis hated Communism and Marxism. It's also not news they hated democracy, except insofar as they manipulated it to their own ends.

I'm not sure about your conclusion about them hating Darwinism and evolution, though. The quote you used mentions "primitive Darwinism". Do you have any idea what they meant by that qualifier? Since they did obviously believe in and practice eugenics, I don't see how one could say they were totally opposed to evolution. I bet their views were more along the lines of "scientific" as opposed to "primitive" evolution.

And since many progressives also oppose democracy in practice if not in principle, one can't honestly say that no one who supports progressive policies can be described as at least a Nazi sympathizer.

I haven't read Goldberg's book, but didn't he provide many, many quotes of famous progressives who spilled gallons of ink writing about the marvelous things Hitler had in store for the Germans with his marvelous program?

Nazism was just an authoritarian rule. They people have manipulated laws and even law of Nazism for there own benefits. Here i truly believe in the fact that Nazis hated communism.
Gold prices today

This one is interesting - perhaps this blog would be covered by it
"The writings of the so-called "Asphalt" literature whose characteristics are superficial witticism and a quick intellectualism. "

and then one of shortest items but in strong language says it all
"4. Our most dangerous enemy is the Jew and those who are his slaves."

Fox TV is screening 1978 "Holocaust" with a very young Meryl Streep. One character is Erik Dorf who becomes corrupted by all this hate and his "career"
under Heydrich and turns into a monster.

Darwin has had much focus on ABCTV (Aust) recently and culminated this week with a program discussing God and Darwin and the difficulties caused by fundamentalist Christians and Dawwinists. presumably "primitive" equates to fundamental

I am never sure what liberal means its become a very emotive word. In UK there was the Liberal party known as the Whigs and here in Aust there is ab entirely different Liberal Party who are basically Tories.

I haven't read Goldberg and Stein so I don't know what exactly they're saying. So I'm not commenting at all on what they said or whether they are right or wrong. What I am commenting on is what you said in your post.

The first thing I would say is that Nazism is at its base an authoritarian system more than some cogent political philosophy operating in the realm of ideas. So banning particular books or persecuting particular groups also has to be viewed through the lens of authoritarianism and seen in this light neither of those actions necessarily means that the ideas in those books or held by by those people are inconsistent with Nazi ideology. And the converse is also true. If the Nazis don't ban a certain book or even praise it does not mean that that book is consistent with Nazi ideology.

I would go as far to suggest that the main reason authoritarian regimes ban books is because they deem them to pose a threat to their grip on power and NOT necessarily because the ideas in those books conflict with the ideas of the authoritarian regime's own ideology. Have you ever asked yourself why was the Vatican placed vernacular translations of the Bible on its index of forbidden books? The Vatican would claim to believe every word of Scripture and would have an answer for every possible objection that its teachings did not accord with Scripture. And yet it still blacklisted the Bible.

The second thing worth noting is to whom this list of books is directed. It's for public libraries. I don't think these books were banned outright in the sense that it was illegal to own them (although I'm happy to be corrected on this point). Rather, libraries were told to take them off their shelves so that people wouldn't have access to books which might undermine the Nazis' position of power.

On your specific points:

1. Yes of course Nazism and Marxist communism are not the same thing. Is anyone seriously claiming that they are? What some people might claim that the differences are not as great as commonly perceived -- especially when you view things through the lens of authoritarianism rather than ideology.

2. I'm not quibbling with this point. Pacifists cannot be good ideological Nazis. Reading pacifist literature probably would turn you against the Nazi regime (if you weren't already).

3. "Liberal" here does NOT equal "left of centre" or "progressive" politics as modern Americans use that term. The opposite of liberal in this sense is not "conservative" or "right wing" as modern Americans seem to think and many people outside of the US as well as more people adopt the peculiar modern American usage of this term. "Classical liberalism" is a very different beast from what modern "liberals" in the US believe. Some modern American "liberals" would probably claim that they are legitimate heirs of classical liberalism but many right of centre people would as well. That is why the Liberal Party of Australia is called the "liberal" party.

Now that said, "liberal" in this document must be read in its historic context. Think 19th Century German "Liberalism". Think the German revolution(s) of 1848/9. This was not the politics of outcome (such as whether we have nationalised health care or not) but of democratic ideals. Freedom of association, freedom of the press, freedom of belief, freedom of conscience. Those things stand in stark opposition to any authoritarian system (which obviously includes Nazism).

Most importantly think the Weimar Republic (which was specifically mentioned in that book list but which you neglected from your quote).

4. Nazism's relationship with Darwinism is complex. A few good academic works have been written on this (to which I can refer you if you're really interested). It's not as straightforward as you said ("Nazis were not Darwinists or Evolutionists when it came to Eugenics, and which pretty much proves that Darwinists are not Nazis"). Yes of course not all German Darwinists of the time were Nazis but some were. And not all Nazis were Darwinists but some were. Many German Darwinist scientists were feted within Nazism and where it suited its agenda Nazism did try to claim Darwinism for its side. Of course that doesn't mean that Darwinism actually *was* on the Nazis' side. In any event Nazism sometimes also distanced itself from Darwinism. Like I said the relationship was complex.

5. The Nazis invoked Christianity because it was convenient for them to do so in order to get the masses onside and not because they agreed with Christianity or disagreed with Atheism. In 1930s Germany -- and even in Germany today -- you could not create an authoritarian nationalist ideology which did not invoke Christianity in some way.

That doesn't mean that the Nazis were Christians or approved of Christianity. In fact they persecuted those Christians who opposed the Nazification of the German Protestant Church ("the Confessing Church").

So yes, atheism wasn't exactly "a Nazi ideal". But neither was Christianity and Nazism sought to oppose those forms of Christianity which did not accept the Nazi totalitarian state.

In conclusion:
* Nazis hated Marxism and Communism.
==> Yes.
* Nazis hated Pacifism.
==> Yes.
* Nazis hated Democracy and progressive politics.
==> Democracy? yes. Progressive politics? Maybe, maybe not. This book list doesn't say anything on the point. You're being anachronistic in your understanding of the word "liberal" here.
* Nazis hated Darwinism and Evolutionary Theory.
==> It's a tad more complex than that. They appropriated aspects of Darwinism and Evolutionary theory while distancing themselves from other aspects of it.
* Nazis hated Atheists.
==> Not exactly. They banned books denigrating the Christian religion from public libraries. That's not the same as saying they hated atheists.

I would quibble only with your statement, "The first thing I would say is that Nazism is at its base an authoritarian system more than some cogent political philosophy operating in the realm of ideas."

I would say that was true of fascism, but the German National Socialist Party of Hitler tried very hard to operate in the realm of ideas, even if that meant banning discussion of opposing ideas.

I guess I better add that I do not believe they were cogent, just that they did attempt to operate within the realm of ideas.

Ah BL alas I think they were awfully cogent. People believed them and absorbed the "hate".

A poll 2 years ago showed that 25% of Germans found aspects of Nazism positive such as attitude to motherhood.
Ron's "reviews": Poll shows only 70% of Germans are sane

I recall the "warm" Christmas films of Nazi's collecting for the poor - these things influenced the people - actually as per The Third Reich in Power, 1933 - 1939 - Richard Evans - Penguin Books I mention the money was going to the Party.

Sad times and very sad that the "ideas" still have influence

I agree that for Nazism ideology played a far more central role than for (say, Italian) fascism. I didn't mean to deny that Nazism was ideological and that that its ideology was well thought out. In retrospect perhaps I expressed the point too strongly. The point I wanted to make was this: merely to focus on ideology misses the point. The Nazis didn't simply ban books because those books disagreed with or even undermined Nazi ideology. They also banned certain books because they threatened their grip on power. That was the point I was making.

When the Nazis were in power they obviously carried out things in accordance with their crazed ideology. The mass killings clearly fall into that category. But when they were in power they also did a lot of other things not strictly dictated by their ideology but rather to sure up their power base. We need to bear that in mind when considering the issue of banning certain books from public libraries.