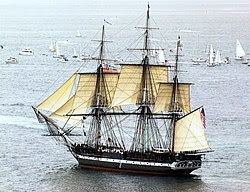 "Our very way of life is under siege," said Mortensen, whose understanding of the Constitution derives not from a close reading of the document but from talk-show pundits, books by television personalities, and the limitless expanse of his own colorful imagination. "It's time for true Americans to stand up and protect the values that make us who we are."

According to Mortensen—an otherwise mild-mannered husband, father, and small-business owner—the most serious threat to his fanciful version of the 222-year-old Constitution is the attempt by far-left "traitors" to strip it of its religious foundation.

"Right there in the preamble, the authors make their priorities clear: 'one nation under God,'" said Mortensen, attributing to the Constitution a line from the Pledge of Allegiance, which itself did not include any reference to a deity until 1954. "Well, there's a reason they put that right at the top."

"Men like Madison and Jefferson were moved by the ideals of Christianity, and wanted the United States to reflect those values as a Christian nation," continued Mortensen, referring to the "Father of the Constitution," James Madison, considered by many historians to be an atheist, and Thomas Jefferson, an Enlightenment-era thinker who rejected the divinity of Christ and was in France at the time the document was written. "The words on the page speak for themselves."

According to sources who have read the nation's charter, the U.S. Constitution and its 27 amendments do not contain the word "God" or "Christ."

Mortensen said his admiration for the loose assemblage of vague half-notions he calls the Constitution has only grown over time. He believes that each detail he has pulled from thin air—from prohibitions on sodomy and flag-burning, to mandatory crackdowns on immigrants, to the right of citizens not to have their hard-earned income confiscated in the form of taxes—has contributed to making it the best framework for governance "since the Ten Commandments."

Photograph: The U.S.S. U.S. Constitution.
Posted by One Salient Oversight at 19:16

It's sad that the headline of that piece describes roughly 95% of the members of the US Congress, as well as the president and 7 or 8 members of the Supreme Court.

Funny story, though, thanks for sharing.