A heatwave has been hitting South Australia hard since the beginning of November. I'll let the stats tell you: 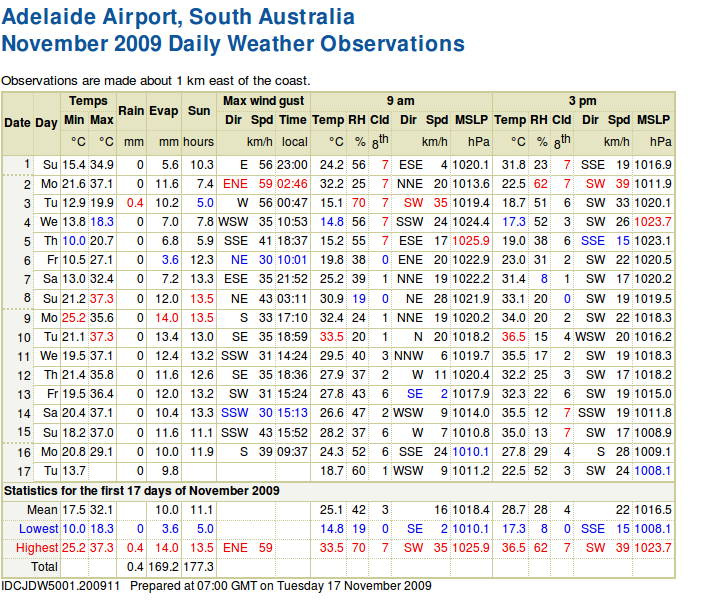 The weather bureau has issued Australia's first "catastrophic" bushfire danger rating for two parts of northern South Australia tomorrow.
The Country Fire Service (CFS) says any fires in the North West Pastoral and Flinders districts will be uncontrollable and there is a very high likelihood that people in their path will die.
The weather bureau says there will be a combination of extremely high temperatures, strong winds and low humidity in the two districts.
It is the first time the rating has been used in Australia since a new national warning system was introduced after Victoria's deadly Black Saturday bushfires in February.
The Country Fire Service's Euan Ferguson says even the most prepared residents should leave their homes by the morning.
"It really will depend on the onset of those very strong wind conditions," he said.
"I would say that at the very latest by 10:00 tomorrow morning they should be in their safer place."
Wendy Shirley of the CFS Volunteers Association estimates that about two-thirds of those in bushfire-prone areas have not heard warnings or do not think it affects them.
"It's those two thirds of people that are not only putting their own, their families' lives and their neighbours' lives at risk, but also the lives of our volunteer firefighters," she said.

The Adelaide Forecast doesn't look good:
After that things should cool down for a few days. Adelaide is not, of course, the target of the fire warning but areas to the north. I visited South Australia back in November 1999 and to the Flinders districts mentioned in the warning and, while it can get quite hot and dry, it was certainly not a desert. There'll be plenty of trees and scrub - and properties - that might get consumed if any fire breaks out. Dust storms are also likely.

Need I remind people that it is not summer yet down under? 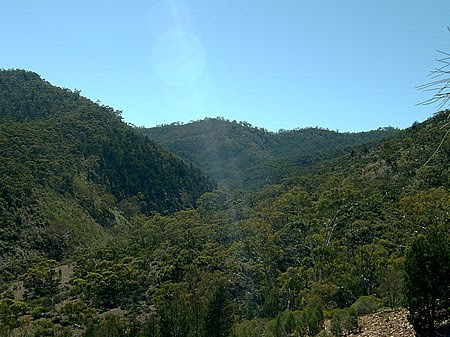 Mount Remarkable National Park. Will this be gone in a few days?
Posted by One Salient Oversight at 20:03

Weird weather up here topside also. In Winnipeg, a prairie city in the middle of Canada, we are enjoying a warm spell of days well above freezing (4 to 9 degrees C) and nights no cooler than -2 or -4. My periwinkles are still blooming, and the trees are budding. Normally we would be huddling around the hearth by now, wrapped in buffalo robes.