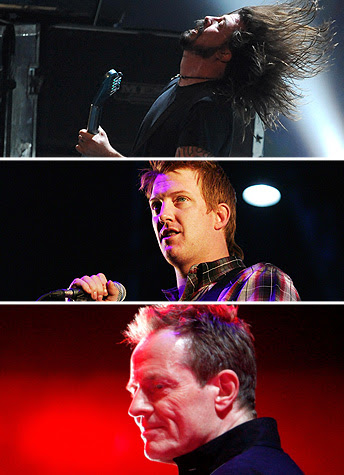 Them Crooked Vultures is a supergroup. Over the least few months the internet has been raving about this band and their upcoming new album, which is due very soon.

The band, knowing just how to appeal to the world's internet citizens, has uploaded their entire album onto Youtube so anyone can hear it for free. Will this hurt their CD sales? I very much doubt it.

The three people who make up the supergroup are a who's who of musical talent. In the picture you see here on the page (better version here) you can see the three members. The guy at the top is Dave Grohl and he is the drummer. He is playing a guitar in the picture because he is a multi-instrumentalist. Grohl is known for being the drummer for Nirvana and the guitarist / lead vocalist for the Foo Fighters. The ordinary looking bloke in the middle is Josh Homme, the guitarist for the band and also a multi-instrumentalist. Homme is known as the guitarist for Kyuss (one of my favourite bands) and for Queens of the Stone Age (who Grohl used to drum for once), and as the drummer for The Eagles of Death Metal (which is neither a death metal band nor an Eagles-sounding band).

But it is the third person in the picture who is the real star - John Paul Jones, the former bass player for Led Zeppelin. Jones is 63 frigging years old but still rocks like a youth. By comparison, Grohl is 40 and Homme is 36, so Jones is almost as old as the other two guys put together. To put it in even more perspective, when Homme was born, Stairway to Heaven had been out nearly two years. Jones, in other words, is old enough to be Grohl's and Homme's father. I've seen live footage of Them Crooked Vultures of the band in action (see here) and Jones looks like he is enjoying himself greatly.

Anyway, I haven't been this excited by a new band since, um, the last time I was. 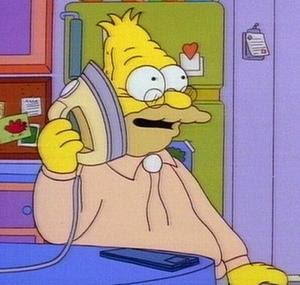 John Paul Jones here. Josh Who? Josh from? Josh from where? The Queen of what?
Posted by One Salient Oversight at 15:31

But anyway - Homme can do no wrong. Them Crooked Vultures is certainly his best band yet.