In which I might become the author of a meme 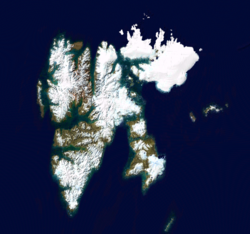 In the world of the internets, the meme author is king. Admiral Ackbar, AYBABTU, Do not want - all these meme creators have been glorified by their actions.

So what did I do? Well, it's still developing, but it's possible that I created a meme called "Move to Svalbard". It started at Reddit (as all horrible things start there) where I posted what I felt was an interesting link. I had been going through Wikipedia when I reached the page on Svalbard, which is a Norwegian Island near the north pole. Now the interesting thing about the history of Svalbard is that it was the subject of an international treaty in 1920 which is still in force today. One of the most important bits of the treaty is the following:

All citizens and all companies of every nation under the treaty are allowed to become residents and to have access to Svalbard including the right to fish, hunt or undertake any kind of maritime, industrial, mining or trade activity. The residents of Svalbard must follow Norwegian law though Norwegian authority cannot discriminate or favor any residents of a certain nationality.

So I thought "this demands a Reddit posting", which I titled Sick of your country? Don't mind cold weather? The treaty of Spitzbergen allows citizens of 39 nations to migrate to Svalbard (a Norwegian island near the North pole) and become residents if they want to, no questions asked. Link here.

The response was enthusiastic. The posting reached into the top five postings for a while and it has so far generated over 500 comments. What are the comments about? Well apart from the terrible Reddit humour (which is why I was drawn to Reddit in the first place), there seems to be some level of enthusiasm for actually moving to Svalbard. It would be interesting if people actually DID migrate to Svalbard as a result of my posting. "Jobs in Svalbard" has apparently become a search phrase as a result.

The interest generated has moved on to another posting made by someone else. It is entitled IAMA Request: Someone living in Svalbard, in the hope that a Svalbardian might just read it and respond. The post was created by someone who wants to know what it is like to live there. In response to this, some people have even begun to comment on Svalbard message boards - which is going to be hard since the message boards and the population all speak either Russian or Norwegian.

How far will this go? Who knows? If a "Reddit IT Community" begins in Svalbard (a semi-serious suggestion by a redditor) you can probably thank me. I'm not going to move there - too cold. But if anyone does, make sure you name something after me.

Update: Someone has decided to visit Svalbard and study there.
Posted by One Salient Oversight at 10:24