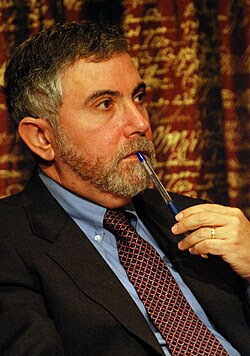 Here: Someone was complaining (rightly) about Krugman's latest column.

I have no problems with Keynesian stimuli - I just think it should be sustainable.

Here in Australia, our government completely paid off public debt, so when the time came to spend up big to kick start the economy, it was sustainable.

In the US, however, big spending stimulus occurred when public debt was already at absurdly high levels. In effect the government had been "stimulating" the economy for most of Reagan and most of Bush 1 and Bush 2. At some point the "chickens have to come home to roost" and the debt must be paid off by running fiscal surpluses (which occurred under Clinton's second term but was nowhere near enough). The longer you leave paying debt off, the harder it will be to do and the more negative effect it will have upon America.

BTW This is not like Hoover and the great depression. Keynes rightly argued that governments should run fiscal surpluses during a depression. Hoover tried to limit government spending because running large deficits was not really a policy that had been tried before. There was certainly no huge debt already there preventing Hoover from doing it.

Fast forward to Obama and the general consensus amongst more left-leaning economists like Krugman is that the stimulus was justified and it worked. I disagree, mainly because of the fact that the US has accrued too much debt already. Had Bush 2 continued Clinton's surpluses it is likely that the federal government's fiscal position would be such that Obama's big spending would be sustainable and would not come back to "haunt" America. But since the debt was already too big, the only option is austerity (the government paying off debt during a recession).
Posted by One Salient Oversight at 10:49