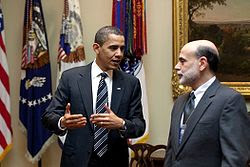 Ben Bernanke has said that US interest rates will remain where they are - at the historically low 0.25% - for the time being. By contrast, Australia's interest rates have been going up. What's going on?

The only real reason to adjust interest rates is in response to inflationary pressures. The latest CPI figures from the US indicate that prices have remained relatively stable over the past month (+0.2%) while the 12 month result is still negative (-1.3%). From that data alone, keeping interest rates where they are appears to be the right move.

But as regular readers know, I'm not a fan of Ben Bernanke. Bernanke not only misjudged the severity of the current downturn while it was happening, he was also partly responsible for the creation of the downturn, being part of the Fed board that approved Greenspan's negative real interest rate regime. My lack of confidence in him knows no bounds.

Good monetary policy doesn't just depend upon current data - it should also look to the future, and the future for the US Dollar is not bright. I have predicted a dollar crash for many years now and while I am happy to be wrong in predicting the when, I stand behind my predictions of what will happen. Whenever currencies drop in value, the result is more expensive imports which is then translated into higher inflation. Inflation can only be dealt with by restricting money creation, which means that interest rates will have to rise. In short, America's future involves inflation.

Given that my predictions about a US dollar crash are correct, Bernanke's decision to keep interest rates low smack of reactivity rather than proactivity. Had Bernake raised interest rates 25 basis points, he would be acting in response to a future event. Instead, he's stuck in the present.

Such activity is not new. The negative real interest rate regime under Greenspan between 2002 and 2005 was based upon present concerns and ignoring the potential for future problems. It also ignored the teachings of history - that negative real interest rates were a recipe for financial and economic disaster (a point which The Washington Consensus makes). If a dollar crash is coming (and the current data shows nothing but a downward trend), then Bernanke should be doing better - adjusting interest rates in response to a future inflationary environment makes perfect sense.
Posted by One Salient Oversight at 17:01