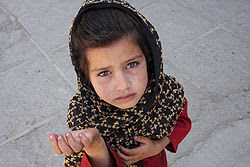 Take the United States, which wasn’t damaged in the war. Take per capita real GDP. Give hostages by taking data from 1950 to 1980, which means including the 1980 recession, but stopping at 2007, so that the current slump isn’t included. Then here’s what you get:

Oh, and if we look at real median family income instead, we get:

In other words, since Reagan and the era of modern finance, GDP growth has dropped and far more money has gone to rich people. The era of conservatism has led to the ordinary person being left behind.
Posted by One Salient Oversight at 08:57

So, Krugman is yearning to return us to the days of double digit inflation, high unemployment and interest rates in excess of 15%? Is that his idea of "doing better"?

Don't you find it suspicious how he selects the periods of time he wishes to compare?

The US "wasn't damaged in the war"??? Maybe not compared to Japan, Germany or Russia or Britain, but we were hardly "undamaged".

I was no supporter of most of G.W. Bush's economic policies, but Krugman's not even trying any more. He's an embarrassment.

I think he's referring back to the 1950s and 1960s, when tax rates were higher, when the federal government had hardly any debt, and when poverty was dramatically reduced. The 1970s were definitely problematic, but I think that some of the post-70s policies did more harm than good. Like many things, we need to find what was good pre 1980 and find out why it was that the post 1980 period has ended up being so poor in comparison.

You can't argue with stats.

You can argue with the misuse of stats, such as Krugman's.

I think we ought to find out what was good both pre and post 1980, and emulate those policies, regardless if they are associated with the Democrats or the Republicans.

Krugman is incapable of agreeing to this, but there have been some bone-headed economic policies from both parties.

Also, your last sentence made me blow coffee all over my monitor. I would agree with your sentence if you took out the qualifier "conservatism".

Kling says, "Everything the Fed has been doing over the past fifteen months makes sense if you think of their goal as transferring wealth from taxpayers to banks."