We're in for a baaaaad time 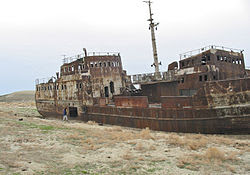 The Baltic Dry Index measuring rates for coal, iron ore, and grains, and other dry goods plummeted below 1000 yesterday, down 92pc since peaking in June.

The daily rental rates for Capesize big ships have dropped $234,000 to $7,340 in weeks, leaving operators stuck with heavy losses on long leases. Empty ships are now crowding Singapore and other global ports.

"It is extremely serious, " said Jeremy Penn, president of the Baltic Exchange. "Freight rates have never fallen this steeply before. It is telling us that world trade in raw materials has slowed dramatically. Shippers are having genuine difficulty obtaining letters of credit from banks," he said.

You know, this current economic crisis just keeps plumbing the depths. A 92% drop in shipping rates is HUGE. While I can't say for sure, I would at least expect a drop in shipping demand of no less than 20%, and probably a whole heap more.

International trade just seems to have dried up. I know of no other period in post-war or pre-war history where this has happened.This is NOT good.
Posted by One Salient Oversight at 22:51

How much did international trade dry up in 1930-31 in the wake of the US's Smoot-Hawley tariff?