How GM's Bankruptcy can help America 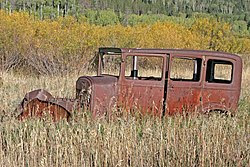 There are currently two schools of thought about the impending demolition of General Motors.

The first school of thought is that GM should be allowed to go bankrupt and die. I'm one of those people and my following argument doesn't differ from this line. Strangely enough there are two sub-schools of thought within this school. The first sub-school says that GM should die because market capitalism rewards innovation and foresight and punishes sameness and near-sightedness. The second sub-school is based upon environmental politics and argues that GM should die off as a punishment for its inability to design and build eco-friendly vehicles and low-emission vehicles.

The second school of thought is that GM should be rescued and, by extension, so should Ford and Chrysler. The reasons for this are many are varied, but mainly include the warning that if GM should go bankrupt, there would be enormous ramifications throughout the economy. Just the refusal to bail out Lehman brothers was a tipping point to financial instability, so would the death of GM. A sub-school of thought also argues that America's security depends upon a robust industrial sector capable of providing skilled workers and factories to build military items - and the death of GM would threaten that security.

My position in economics is noticeably leftist - I believe in larger government spending to provide basic needs to society that cannot be reliably procured through the free market. Moreover, such larger spending would require higher taxes to fund it. Yet I am not a hard-line socialist or communist. The idea that the government should regulate and control every single sector of the economy - either through complex legislation or bureaucratic planning or a combination of the two - is one which I do not for a very good reason: It doesn't work. That's why I'm an Ordoliberal.

The auto industry is one sector of the economy that requires a modest but strictly enforced level of regulation. Safety regulations, along with emissions standards and fuel economy benchmarks must certainly be adhered to. Yet the fact is that GM, Chrysler and Ford are public companies, not government organisations. The profits they make benefit their shareholders, not the government. Bailing out "the big three" is thus problematic because their very existence depended upon the actions of the marketplace - and thus so should their (potential) death.

Of course, such an argument is ideological. There is, however, one very good practical reasons for letting GM go belly up - it will make Ford's and Chrysler's market position easier to sustain.

Forget for a moment the complex world of financial derivatives and leveraging and other such muck. Instead, focus upon basic economics - a product sold in a competitive marketplace, in this case, automobiles. If GM would go belly up, what would happen? Let's consider the laws of supply and demand.

The first thing to happen would be that the factories making GM automobiles would stop making them.

The second thing to happen would be a decline in the supply of new GM automobiles across America.

The third thing to happen would be an increase in price of new automobiles across America - those automobiles built by Chrysler, Ford and overseas manufacturers.

The fourth thing to happen would be increased profits experienced by the remaining manufacturers.

The fifth thing to happen would be an eventual recognition by banks and financial institutions that Chrysler and Ford are safer companies to invest in again, resulting in higher share prices for the "remaining two" and higher credit ratings for their corporate debt.

And as profits and sales increase, the final thing to happen would be increased investment and production, which would then result in higher demand for skilled auto workers, many of whom could be sourced from the laid off GM employees.

Of course, this is not a perfect scenario as it does not take into account other variables, such as the severity of the recession. If the recession is more severe and longer lasting than normal, then there is a chance that either Ford or Chrysler may go bankrupt as well. Yet even that process, while painful, will eventually lead to higher levels of profitability amongst the remaining market competitors once another manufacturer goes bankrupt. It also doesn't take into account variables like Peak Oil or tougher emissions standards by governments in response to global warming. It doesn't take into account the potential costs of converting automobile output into entirely electric vehicles rather than those powered by  internal combustion engines.

Yet one fact remains - if GM is bailed out, not only will it not help the auto industry become profitable again, it will also not help the entire economy retool itself and cope with events when the variables are taken into account. Unless, of course,  Obama and Congress decide to nationalise and centrally plan the economy by paying auto workers to make cars no one wants to buy.

And as for the social effects of mass unemployment and the destroyed pension and health care plans of current and retired auto workers, those should be taken up by the federal government. Expensive? Yes. But probably not as expensive as bailing out an industry that doesn't deserve help.
Posted by One Salient Oversight at 10:34

You know what I'd do.

Enact a WW2 style "emergency economy" and pay to retool the big 3 to mass produce:
* rail (intercity trains, city trams and trolley buses)
* renewables (wind and solar thermal)
* EV's / hybrids / alternatives (for those sectors and trades that HAVE to drive, such as some mining, farming, etc)

But I always was a Nazi! (I thought I'd short circuit the potential for "Godwin's Law" by enacting it myself. ;-)