Deflation and the "Nuclear Option" 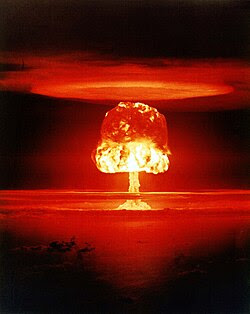 If Mish and others are right, and if my own predictions of a dollar crash are wrong, then we are entering a deflationary period not experienced since the great depression.

And this has certain advantages, namely the ability that central banks have that is now being called "The Nuclear Option" - Money Printing.

It's considered a "Nuclear Option" for very good reason. Everyone knows about Weimar Germany and Mugabe's Zimbabwe - creating money has the effect of stimulating inflation. Too much of it and hyperinflation results.

But with prices potentially dropping over the long term, and with no room left to lower interest rates, there arises the potential to judiciously engage in money printing.

Ben Bernanke knows this. His nickname, "Helicopter Ben", was attributed to him for his suggestion that money printing could be used to reinflate a deflating economy. Thus the picture of Bernanke flying a helicopter and throwing money all over the country was born.

The question is, of course, what to do with the money once it is created. Where is it sent? One option would be to send it in the form of a stimulus check to ordinary Americans. This would certainly have a level of popular support as it would be going directly to help people suffering from the economic downturn.

Another option would be to use it as an additional bail out. It could be granted to financial institutions still reeling from the credit crisis. Given the sheer amount of cash already spent on this venture, it would probably not have popular support nor would it necessarily be the best choice.

The third option, though, is my favourite - create the money and use it to pay off federal government debt. This would have the dual effect of reinflating during a deflationary period while, at the same time, addressing a serious economic imbalance. As long time readers know, federal government debt is one of my bugbears and has always stood in the way of effective government fiscal stimuli. The money used to pay off government debt would then find its way to the financial institutions who have invested in treasuries, thus granting them extra liquidity to relieve them of debt. Thus paying off government debt would have the same effect as a broad bail out package.

Then again, this idea is predicated upon the belief that the US Dollar isn't going to crash. If the Dollar does crash, the only thing to do is to "go Volcker" and raise interest rates to destroy inflation. In an economy already seriously weakened, such an option would be deadly. But, then again, a US Dollar crash would bring the US economy closer to collapse than at any point since the Civil War.

But if I'm wrong, and foreign investors decide to altruistically prop up the US economy by NOT selling off the Dollar, then implementing the "nuclear option" and paying off government debt should be seriously considered.

Update:
I now think this is a BAD idea.
Posted by One Salient Oversight at 09:30

I just put a video up on my blog that I'd like to know what you think of... You may have heard of this guy before or what he has to say... I hadn't. If you don't want to leave a comment there, could you please e-mail me at coffeebeankel@earthlink.net?

ARE YOU F-ING KIDDING ME?

You saw what happened when the Republicans got government debt, could you even imagine the shit storm caused by a president like Bush when given the precedent of fiat money creation.

First of all I'm not certain if your statement "this post is a joke" refers to MY article or to YOUR comment, so I'll have to assume the worst.

First of all, I'm no hater of fiat currenecy. I posted about it recently.

Secondly, the Federal Reserve has the power to create money by fiat, not the federal government. The Fed, though, is ultimately controlled by congress so any fiat money creation will have to get approved by America's politicians before it happens. Alternatively, if Bernanke already has the authority and uses it badly, congress could easily fire him, thus preventing any more problems from occurring.

Thirdly, as I state in my article the only possible pre-existing conditions for such an action (creating money to pay off debt) would be a deflationary environment. The creation of reasonable amounts of money by fiat would not necessarily result in huge levels of inflation.

And as I type this I realise that my article may have implied a complete payoff of government debt all at once. That was not what I was proposing at all - merely the creation of enough money to prevent deflation that is used to pay of some of that debt.

Oh no, I was joking in my post... trying to be ironic and failing. Miserably.