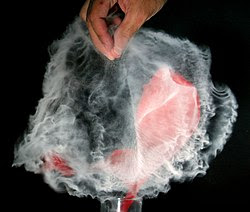 In another sign that the struggling economy continues to slow, consumer prices tumbled by a record amount in October, carried lower by skidding energy and transportation prices, raising the specter of deflation.

A key measure of how much Americans pay for groceries, clothing, entertainment and other goods and services, fell 1 percent in October, according to the Labor Department, the biggest drop in the 61-year history of the consumer price index. Much of the decline could be traced to a sharp drop of 14 percent in the price of gasoline, but the cost of a broad range of goods including clothes, milk and vegetables also fell sharply.

A sustained drop in prices could worsen the slowdown by straining businesses and workers. It could also blunt the impact of interest rate cuts and other actions by the Federal Reserve and force policy makers to use more unconventional tools to revive the economy.

While the month saw a 1.0% decline, the year on year - ie annual - figures are still positive at 3.7%. This is because inflation in the last 12 months was still going way up, especially when the US Dollar was being sold off. The recent rise in the US Dollar has ensured that imported goods decrease in value, adding more deflationary pressure.

As any long-term reader of my blog knows, I am an "Inflationista". I won't pretend that the current reports clash with my own longer term predictions from 6-12 months ago. But then I didn't foresee a US Dollar bubble forming either, which is responsible for much of the downward pressure on consumer prices in the last few months. In fact, so convinced was I of the inflation position that when Mike Shedlock predicted lower inflation in August, I deliberately bookmarked the page in the hope of debunking him in the near future. Having just read that page, let me quote one of his classic lines:

There is going to be a stunning drop in the CPI coming up that will smack inflationistas square in the face. Unfortunately that wake-up call is highly unlikely to stop silly talk about cost-push inflation.

So give Mish some kudos here, he certainly deserves it.

Having said that, let me now remove my hair shirt and issue my standard warning - as long as the US economy remains vulnerable to capital flight there will always be a serious possibility of a US Dollar collapse, a process that will inevitably produce an inflationary environment. And this will be true even while aggregate demand falls. This is the lesson we have learned from Russia and Asia in the 1990s, who experienced capital flight and who battled economic contraction and inflation at the same time.

But so long as the US Dollar remains at its current level, deflationary conditions will exist.

As an aside, the huge deflationary drop in October 2008, which the NYT reports as the biggest fall in the 61 year history of the consumer price index, is also a precursor of an upward spike in unemployment levels. In fact, I think that November's unemployment figures will either be a record jump or the worst for a few decades. In 1974-75, for instance, unemployment jumped from 6.0% in October 1974 to 6.6% in November 1974, then to 7.2% in December 1974, then to 8.1% in January 1975 and thence to 9.0% in May 1975. That rise was 300 basis points (6.0% to 9.0%)  in 8 months and probably the fastest ever increase in unemployment in US history since the Depression. I think we can expect similar results in the next few months.
Posted by One Salient Oversight at 10:01