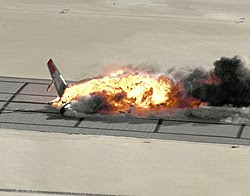 Lets take the auto industry: GM is basically out of business because they are losing billions of dollars every month. Why? Well, I'll tell you why: Because people are not buying their cars and trucks, they're buying other manufacturers stuff. GM has lost market share. It's very simple.

So, what does our government want to do? They want to take YOUR and MY tax money and give it to them to "rescue them." See, I am a capitalist. I believe that companies should rise and fall based on how they do in the free market. There is no need to rescue a company because the market has already decided they are done.

I have made a personal decision to buy Toyota when we purchased our last two family cars. I did this based on research, value, repair history, models available, and price. I chose NOT to give my money to GM, and I don't want the government to make that decision for me.

Lets do a comparison: The ice block delivery business was huge in the early 1900's, and there were many men and women employed in this industry. When the refrigerator was invented in 1911 - these companies started to fail. They lost "billions every month". They employed "thousands of hard working Americans". What if the government decided to rescue them? Throw money at the ice block delivery companies to keep them in business? What would have happened to the refrigerator companies? I'll tell you what: It would have significantly slowed PROGRESS. Innovation and the MARKET decided together that having ice delivered to an ice box wasn't as good as a refrigerator. Simple as that.

GM is an ice delivery company. Let them go if they can't innovate - don't SLOW PROGRESS!

Dear Government, let capitalism reign. Let good companies grow and poor companies shrink. Go ahead and let the bubble burst, it'll hurt for a while but the state of the economy in a few years will be much better than if you just prolonged the inevitable. Think of it like a forest fire, it's deviating when it's happening but in a few seasons you will see fresh, new, healthy growth.

Being the centre-leftist that I am, it would be tempting to answer such an argument by pointing out all the problems of letting businesses like these crash and burn. But, to tell you the truth, at this point I'm a raging capitalist.

I suppose it's a "live by the sword die by the sword" argument - if an individual or business is profiting from a market economy, then when the market turns against them, they can't complain if they go under.

The sort of socialism that I like being practised is when people - not businesses - who suffer from the ups and downs of the marketplace are given a safety net to cushion them from the fall. If one or more of the "Big 3" automakers in the US go bankrupt and are closed down, the result would certainly be unemployment and suffering for those directly involved. Instead of throwing money at the auto makers (who have failed to remain profitable in the market), money should be diverted to the former workers as they get their lives together and seek alternative employment - employment that the market will eventually provide.

Of course, it would be far better had a market crash been prevented in the first place. The market itself can't prevent its own crashing, so this is up to government.

What could the US government have done to prevent this economic crisis? Had interest rates been higher after 2001 a housing bubble would never have formed, and had Bush not enacted tax cuts during his first term, money would not have been thrown into this bubble either (not to mention lower levels of public debt).
Posted by One Salient Oversight at 10:20

You said the tax cuts threw money into the bubble and was one of the causes of this current meltdown. That may be true, but if there was already a bubble, then Bush's tax cuts didn't cause it.

You have to go back further than that to find the source of the bubble: to Congress easing banking regulations (which resulted in increased liquidity in the system, just as promised) and then the Fed injecting further unnecessary liquidity into the system, partially out of some weird fear that Y2K was going to be a big problem. In addition, the breakdown of any spending discipline on Congress's part injected further unnecessary liquidity into the system. Bush's tax cuts, while contributory, were hardly the root cause.

Oh, by the way, I concur that GM and the other automakers should be allowed to go under, or restructure. But I read a story quoting the United Auto Worker's president, Ron Gettelfinger, who made it clear that the UAW will not cooperate with any restructuring that affects his members in any way.

I believe it would be best if GM were allowed to die.

I agree that the Bush tax cuts didn't cause the housing bubble - it was Greenspan's negative real interest rates between 2002 and 2005 that did that.

The tax cuts made the situation worse though - with tax cuts given to higher income earners, people threw more money into the housing market than they did before.

The UAW are a bunch of idiots. Too many unions are too blinkered to see the big picture. The UAW should have really negotiated with the government to provide pensions and health care rather than the company - which is the case elsewhere in the western world.

Having said that, the UAW are ultimately not the ones fully responsible for this mess - the management of the big 3 are.