Well, time for Aussies to be in bed. The report was very bad but, as always, my doomsome ways got the better of me. Anyway, I'll leave you this picture showing very clearly that Obama's election has pleased North Korea: 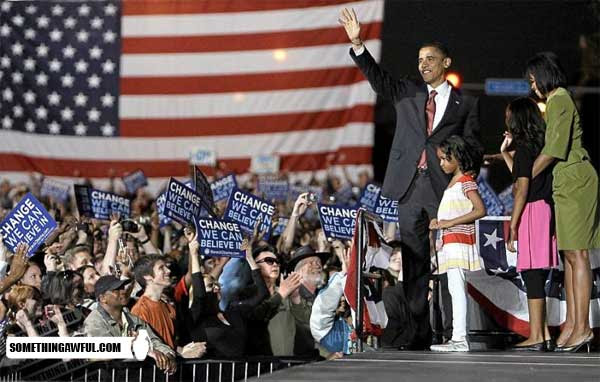 Year over year employment is now negative (there are 1.1 million fewer Americans employed in Oct 2008 than in Oct 2007). This is another very weak employment report.

Some sad looking graphs too over at CR.

October's job cuts were much worse than anticipated by Wall Street economists who had forecast 200,000 would be lost. Even more strikingly, the department revised September's losses to 284,000 - the highest since November 2001 just after the September terror attacks - and also revised August losses higher to 127,000.

That meant 179,000 more jobs were cut in August and September than previously had been thought. In total over the three months through October, 651,000 jobs have been slashed from payrolls.

In manufacturing alone, a whopping 90,000 jobs were cut in October - a period when 27,000 Boeing Co. assembly workers were on strike. That followed a loss of 56,000 factory jobs in September.

So not only is the news bad, it also was bad.

Many economists now expect the unemployment rate to reach 8 percent by the middle of next year, a level not seen in 25 years. Most forecasts envision the economy shrinking well into the next year and perhaps until 2010.

Recent days have offered fresh indications of trouble. The annual pace of auto sales fell off sharply in October, down 15 percent compared to September, according to analysis from Goldman Sachs.

The U.S. unemployment rate climbed to the highest level since 1994 as payrolls tumbled, signaling that the economic slump inherited by Barack Obama will last well into his first year as president.

The jobless rate rose to 6.5 percent in October from 6.1 percent the previous month, the Labor Department reported today in Washington. Employers cut 240,000 workers after a loss of 284,000 in September, the biggest two-month slide since 2001.

“The U.S. economy is in a very deep recession,’’ John Herrmann, president of Hermann Forecasting LLC in Summit, New Jersey, wrote in a note to clients after the release. “We look for a $500 billion fiscal stimulus from President-elect Obama.’’

Stock futures dropped immediately after the report’s publication, then recouped losses. Futures on the Standard & Poor’s 500 Stock Index were up 1 percent at 913.50 at 8:44 a.m. in New York. Benchmark 10-year Treasury note yields rose to 3.74 percent from 3.69 percent late yesterday.

Unemployment amongst college grads went from 2.5% to 3.1%. That's a big comparative leap.
High School dropouts went from 9.6% to 10.3%.
High school grads and "some college" were unchanged. It looks as though the unemployment hike was felt at the top and at the bottom of the educational ladder.

Two industries have doubled their unemployment rate in the last year: Farming, fishing and forestry (4.6% to 9.5%) and Installation, maintenance and repair (2.4% to 5.1%). The latter I can understand, but the former?

An Obama effect? Doubt it. But it sounded funny.

And today's magic number is:

Looks like I've got my GMT times mixed up. Sorry.

Entrail reader consensus for rate is 6.3% (average and median).


-------------------
Well it's time for our monthly live-blogging for unemployment. If anyone's been reading these you'd know that my strike rate in predicting this area isn't great, but it's sort of fun in a morbid sort of way.

Last month, US unemployment remained steady at 6.1%. Given that 2008 Q3 GDP was a contraction, and given that October saw some of the worst credit crisis events thus far, I would expect unemployment to rise.

I will make a prediction and that will be that there will be a large jump. I'm going to say 7.0% which, being 90 basis points more than last month's, would constitute a highly unusual event. Then again, we live in very unusual economic times, and I am certain that last month's economic shenanigans will result in something rather painful and sudden.

The report will be available 12.30GMT / 0830 EST. Click here to see it when it comes out. As usual I will provide a direct link to the pdf download once it becomes available, plus add comments and give links when the news comes out. Last month I was convinced that things would be very bad but they passed without a blip. I remain convinced that there is a good chance of a major uptick in unemployment.

See you then.
Posted by One Salient Oversight at 21:53

Jobless rates today bolted to an eye-popping 6.5 percent. This tells of many things but 2 things in particular – 1) Businesses both large and small are struggling and 2) after we reach the bottom of this recession, there will be many positions to be filled by companies, large and small.

Listen to the tone of airwaves, minus the recent election of President-elect Obama, everything has been so negative! Honestly, think about how negatively our society portrays almost every situation. Acquiring a negative perspective is easy, but stand up and make a statement about yourself – tell yourself you will not victim to this negative jargon! If you find yourself in a hole, ask yourself this question: what will more likely improve your chances of being successful – continuing with a negative outlook or transforming your thought patterns into a positive outlook?

I work with many high level c-level executives that have experienced tremendous success in their life. The one binding characteristic between all of them is that they do not let external, uncontrollable factors influence their inner dialogue and visions for future success. In fact, many of these people use a vision board – a collage of images that symbolize personal goals success - to help them keep focused on their positivity and desired outcomes. I might suggest using one yourself if you are currently in a rut. You should look at the helpful information on how to make one over at www.TheVisionBoardKit.com.