US Dollar gains on a weak foundation 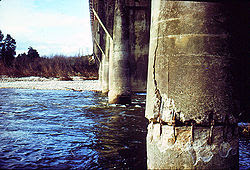 Everyone's talking about Brad Setser and by everyone I mean that if St Paul has noticed him then everyone has. The reason why everyone is noticing him is that he is scary. Not scary in a vampire like way, but scary in a scientific, "my research indicates that the pathogen is resistant to all antibiotics and is reproducing and mutating faster than we can handle and we need to contact the CDC immediately" sort of way.

I mean I'm not scary compared to Brad. I may have a mug ugly enough to scare little children but little else.

So what's scary Brad told us today? Well, he's been reporting about Agency debt. Basically he has discovered that foreign investors have sold off huge lumps of such debt and have been buying up treasuries.

Well, that's my theory and I'm sticking with it at the moment (unless someone out there can show me where I'm wrong which would be most appreciated).

So when it comes to agency debt - government backed securities from private companies - the market is obviously unhappy. These securities are typically the ones issued by Fannie and Freddie - private companies whose debts are guaranteed by the US government. What Brad Setser has shown is that foreign investors have divested themselves of these agencies and have bought treasuries instead. And, just like the share market, selling off agency debt to buy treasuries increases the value of the US Dollar.

Moreover, with the Forex market operating the way any normal market does, as soon as big foreign investors (and by this we are looking at foreign central banks and oil-rich nations) start moving massive amounts of money around, the little people begin to notice and take advantage of it. They have invested in US Dollars not because it is safe but because the rest of the market has done so and they want in on the profits.

Sort of like what happened with the subprime bubble.

Brad, of course, doesn't say any of this. He's too busy talking about the trade deficit to notice. Maybe I've just discovered something more frightening than he has.

What are the implications of this? Simple. The US Dollar has increased in value because of market behaviour that is not based upon the security of the US economy but is a reaction to its weakness. Moreover, once treasuries are bought they are only one step away from being sold off and used to purchase other currencies. While we might look at the forex market and say "wow, the US IS the place to invest in a crisis", what we should really be worried about is the fine print. In this case, agency debt has been sold off in droves.

And this, of course, reinforces the "reverse tsunami" idea that was thought up by Peter Dorman over at Econospeak:

This afternoon I co-led a forum on the financial crisis with my Evergreen colleague Peter Bohmer. I had a flash as I was preparing: at some future point we could be in for a reverse tsunami.

Here’s the idea: A real tsunami begins with an outward flow of water. If you’re standing on the beach and suddenly the water line retreats 10 or 20 meters, it’s time to race for higher ground. Now consider the opposite phenomenon. The massive Fed/Treasury spending spree to hold the crisis at bay, thus far unsuccessful, is being financed by a massive capital inflow. Some of this comes from foreign CB’s eager to do their part, but a big part is the result of global capital flight to the supposedly least risky currency. Suppose we get out of this alive and calm returns to the markets. Most of those people are going to want to bring their money back—that’s the reverse tsunami. How do we finance that? The Fed’s balance sheet will be wall-to-wall junk.

So. Evidence that the US Dollar is booming like a investment bubble. At some point Dorman's reverse tsunami will suddenly wash back leaving the US high and dry with a tanked currency, 1930s type unemployment and 1970s type inflation.

More doom and gloom. My wife just made a nice banana and date cake though, so it's not all bad.
Posted by One Salient Oversight at 10:47

eToro is the ultimate forex trading platform for new and established traders.