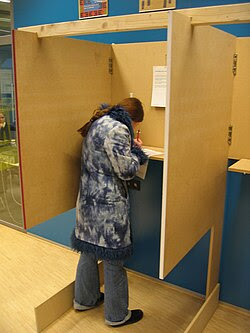 Byron Smith explains three advantages that Australia has over the US when it comes to elections:
I agree with them all. Here's why:

An Independent Electoral System
Electoral boundaries are determined not be political parties but by bureaucrats. There's no perfect way of doing this sort of thing but I would argue most vociferously that bureaucrats are better at doing it because they are neither advantaged nor disadvantaged by any changes in boundary. Simple rules can be set up - such as keeping electoral districts populated by approximately the same amount of people and ensuring that the area is more or less a sensible "shape". By contrast, electoral boundaries in the US can be stretched out all over the place to make the seat "safer" for the incumbent or more likely to fall to the party in power.

Another good thing about the AEC is that they control all elections in Australia. This means that when Australians vote in Federal, state or local elections, the AEC, a Federal body, looks after all the details. This also means that the way people vote remains the same all over the country. When I walk into a voting booth here in Newcastle I am doing exactly the same thing as a person in North Western Australia - the names on the voting slips might be different, but the manner in which I vote is the same. This is in contrast to the US system where local governments control how people vote in all elections. This means that one county might have paper ballots while the neighbouring county has computer touch screens while the county next to that pulls levers. The "hanging chads" of the 2000 election showed up just how silly this had become.

Compulsory Voting
I find it amazing that Americans argue that it is our civic duty to vote yet are aghast at the idea that the state should compel its citizens to vote. If I'm an American who chooses not to vote, I am looked down upon and criticised yet if the law requires me to vote then somehow that is a breach of my freedom? As Byron points out, jury duty is a civic duty that is compulsory - so why isn't voting? There's no money wasted here in Australia on "get out to vote" campaigns. Compulsory voting doesn't stop people from choosing not to vote - all they do is turn up at the polling place, get their name marked off and then they can leave without voting if they want to. About 95% of people in Australia vote. The 5% who don't are either too sick (and who can get a medical waiver) or who don't care and are willing to pay the small fine for not voting.

Preferential Voting
Preferential voting is what Australia calls Instant Runoff Voting. It enables the voter to send his/her vote to another candidate if he votes for a 3rd/4th/5th/etc party candidate. This would've enabled Ralph Nader's 2000 presidential election votes to be redistributed according to the voter's second choice - in this case, Al Gore. It also would've redistributed Ross Perot's 1992 votes, which would've probably been redistributed to George HW Bush and given him the election.

The real advantage of preferential voting is that the major parties have to ensure that they modify their policies to prevent third parties from becoming too powerful. If they don't, the third party can convince voters to send preferences to the opposing party. Preferential voting allows voters to communicate their wishes more accurately to the parties in power, giving them information about what policies they should change or keep in order to remain in power. So while a two-party system is still maintained, preferential voting ensures that policies get changed if the parties wish to stay in power. The great news is that voting for a third party is NOT a waste of a vote.

The last time I voted for a major party was in 1996 when I voted for John Howard and the Liberal Party. Since then I have given my "primary vote" to either the Australian Democrats or The Greens.

Even though I like the way we do things here, I still prefer Demarchy. Imagine having a Democracy without political parties or elections, where the people in power are expected to let their reason and their conscience determine what laws to pass?
Posted by One Salient Oversight at 09:41

Well I wonder about the the Aust electoral boundary system. The state to our north was often accused of gerrymanders. Why did Bennelong creep west so Howard kept having a more "left" area until eventually he lost.

Well as I am from UK my background is non compulsory voting and first past the post. It was said in UK that if it rained on election day then the Labour party had no chance - the Tories all had cars to drive to the polling booths.

I sort of prefer the preferential system for our House of Reps. I think people understand it and with first past the post in UK if a Labour and a Liberal (back in the days when they were similar parties) stood against a Tory then the Tory would most likely win.

But I don't know about the Aust Senate preferential system - most people have no idea how it works. I tell everyone to vote above the line - which sadly means toeing the allocation already decided by their first choice. However if they try to number the choices themselves which is what they should be doing according to the concept then they are almost certain to make a mistake.

I was a scrutineer a few years ago and when they started on Senate counting the results were terrible. Three EQUAL piles from first count. Next obviously INVALID below the line attempts. And then possibly valid Above the line papers - needing another check.

I am hearing 73.5% of possible voters are registered in USA. And they think a record 80% will vote. That is less than 60% of possibles. Hopefully in UK the turn out is towards 80%.

What I do not understand in USA is registering as a Democrat - why do that? And then voting as Republican - why do that. Does party registration simply mean you can vote in Primaries?

The missing Senate pile from my post were the Valid Above the Lines vote.
All we looked for was a ONE in One box only.

Many people started to fill in numbers and put a lot and then stopped - which makes vote invalid. Of course that way is allowed on Reps paper - adding to voter confusion. Others go numbers muddled and duplicated them or missed some.

Perhaps computer like in USA would help. But they seem to still break down etc as I am hearing today.

5 men and 5 women mandated from each of 40 electorates around Australia is interesting.
Also, the idea of elections "constantly rolling" across the country with a simple seat-by seat vote occurring every 7 weeks somewhere in the nation would give parliament a gradual shift in it's demographic. Campaigning is by mail pack and maybe guaranteed but limited public air time saves on campaign costs. We get to have our say, once every 5 years, and that's it. The parliament elects an executive group who run the country, and reorganized super-local councils run service provision at the local level.

Hey, did you see this? Local council groups are starting to recommend abolishing the States.

Registering for a party is not required in every state. And you're right: where it is required it is for purposes of primary elections. Everyone gets the same General Election ballot. My state does not have required party registration. Those that do usually allow Independent, but I'm not sure what that means for them in the primaries.

I don't know if they still have this, but I remember not too long ago one could go into the booth, pull the ALL DEMOCRATIC or ALL REPUBLICAN lever and you were done.

By the way, my county has preferential voting for all county wide offices. This is our first election with it. I'll report back on how it worked out.

Great, just remember to vote for the environment! ;)

The state and local elections are actually administered by the state electoral commissions, but it's almost the same.

And Ron, you'd better be careful about saying it's ok to stop numbering on the Reps ballot - they still get counted, but it's not acutally allowed - people have got into trouble for advocating similar things. It is allowed in NSW elections, though.

Thanks Jonathan
Yes I think I got confused over that last time - the State is one rule and Fed another. But I always try to follow some How To Vote card.

However I think the what is valid and what is not gets confused and things allowed because of that.

So we have a result in USA and It is Historic. A lot of joy and celebration.