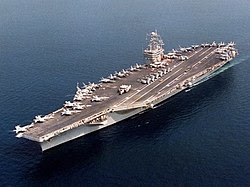 This is an actual radio conversation between the American Aircraft Carrier USS Nimitz with Irish authorities off the west coast of Ireland in October 1985.

NIMITZ: Negative. Recommend strongly that you divert your course 15 degrees to the north to avoid the collision.

IRISH: American vessel, it is urgently recommended that you divert your course 15 degrees to the south to avoid the collision.

NIMITZ: Negative. Recommend again strongly that you divert your course 15 degrees to the North.

IRISH: No. I say again, divert your course!

NIMITZ: This is the USS Nimitz. We are carrying 34 F-14 Tomcat Fighters and 28 A-6 Intruder Bombers. We also have 13 Destroyers and 5 Heavy Cruisers. We DEMAND that you change YOUR course north 15 degrees otherwise you will enter our zone of exclusion and we will take appropriate measures.

IRISH: This is the Croaghaun lighthouse on Achill Island. Your call.

NIMITZ: You f**** Irish think you're so damn good! Coming to our country and running the police and fire brigades. I'm f**** sick of it all! If you don't like America then go home!

IRISH: I am home. This is Ireland, not America. Why don't YOU get out of our territorial waters and go home?

IRISH: Hah! You can't get out of this one yank! I'd like to see you and your pretty warships try to sail through an island!

NIMITZ: USS Arkansas, are you listening in on this?

IRISH: Hold on a second!

ARKANSAS: Roger Nimitz, missile launched. May God have mercy on their petty souls.

And that's the story of how Croaghaun lost its lighthouse and why there's a massive hole where it used to be:

Posted by One Salient Oversight at 18:56

Ha ha ha! There were some good moments there because as I read it I actually thought it was real until the bit at the end when I didn't.