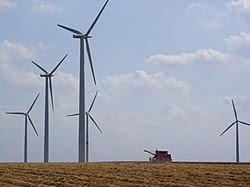 From the department of pipe dreams only work when lots of pipes are built:

Former Vice President Al Gore said on Thursday that Americans must abandon electricity generated by fossil fuels within a decade and rely on the sun, the winds and other environmentally friendly sources of power, or risk losing their national security as well as their creature comforts.

“The survival of the United States of America as we know it is at risk,” Mr. Gore said in a speech to an energy conference here. “The future of human civilization is at stake.”

Mr. Gore called for the kind of concerted national effort that enabled Americans to walk on the moon 39 years ago this month, just eight years after President John F. Kennedy famously embraced that goal. He said the goal of producing all of the nation’s electricity from “renewable energy and truly clean, carbon-free sources” within 10 years is not some farfetched vision, although he said it would require fundamental changes in political thinking and personal expectations.

“This goal is achievable, affordable and transformative,” Mr. Gore said in his remarks at the conference. “It represents a challenge to all Americans, in every walk of life — to our political leaders, entrepreneurs, innovators, engineers, and to every citizen.”

The Oil Drum, which is full of people based on reality, has checked to see whether this is possible:

The short answer is: while 100% is probably unrealistic, it's not unreasonable to expect to be able to get pretty close to that number (say, in the 50-90% range) in that timeframe, and it is very likely that it makes a LOT of sense economically.

One of the reasons why so many people think "green power" won't work is because it is somehow economically unviable. Wind and Solar power technology has been coming down in price dramatically in the last few years, and it seems more politically, economically and environmentally responsible to build them than ever before.
Posted by One Salient Oversight at 15:53

The Oil Drum is NOT full of people based on reality. There are a handful of serious, sober, informed analysts with a real grasp of the data and the models like Gail the Actuary, Stuart Staniford, Robert Rapier, etc. The rest are just excitable amateurs who shoot their mouths off in the comments section repeating the same old cliches and without anything substantial to contribute whatsoever.

Actually I was referring only to the people who write the articles.