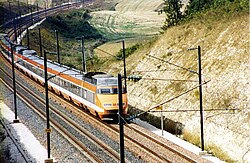 From the department of government run businesses will always fail because they are inefficient loss makers NOT:

The rail renaissance in Europe is racing ahead like a 320kph TGV yet Guillaume Pepy, head of SNCF, sees risks as well as opportunities as he celebrates the centenary of the reborn Mont Blanc Express aboard one of its six new electric traction trains.

Last weekend saw the start of the French summer holiday season and 1.3 million people thronged Paris's stations as they headed for the mountains and sea. The elongated twin-set TGVs pulling out of the Gare de Lyon virtually every five minutes are packed with up to 1,000 passengers. The concourse and platforms are so crammed with anxious families and international backpackers it's surprising they all get on board on time.

Even in the driving rain sweeping through the French Alps, accompanied by thunder and lightning, drenched walkers and climbers rush to join the "express" linking St Gervais with Vallorcine on the Franco-Swiss border and offering stunning views of the Mer de Glace.

Pepy, SNCF chairman and chief executive (PDG) since February, says that, unlike his predecessors who had to manage a railway recession, he is presiding over an accelerating boom. The state-owned SNCF delivered a net €1.1bn (£875m) profit last year and first-half figures, due next week, are said to be sparkling. Pepy envisages up to 80m extra passenger trips this year or an increase of around 8%.

And they're electric too.
Posted by One Salient Oversight at 11:21

Rail making a profit? Well yes, with a few caveats. SNCF is far from the whole picture of French rail. You also need to consider the debt-laden RFF (http://en.wikipedia.org/wiki/R%C3%A9seau_Ferr%C3%A9_de_France) which was hived off from SNCF a few years ago under an EU requirement to separate rail operations from rail infrastructure. RFF is responsible for the rail infrastructure in France (which doesn't make a profit) while SNCF runs the trains (and has been making a profit for a few years now). I think you'll find that rail as a whole (trains plus infrastructure) is not as profitable as the €1.1bn figure might suggest.

If you're curious about the details of SNCF's operations and profitability you may be interested in reading the Financial Report (in French) here:
http://tinyurl.com/6zdhvt

Unfortunately running trains in Australia will never really be profitable -- even if you hive off the infrastructure from the operations (as has been done in much of the country). In places like France you have a considerably larger population living in a smaller area with shorter distances between major centres, higher cost of driving, massive public investment in rail infrastructure with modern technology (high speed lines -- unlike Australia's steam age rail infrastructure) and let's not forget considerably higher fares.