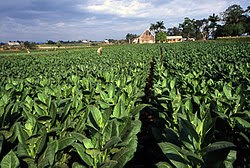 From the department of not a communist country:

Cuba is to put more state-controlled farm land into private hands, in a move to increase the island's lagging food production.

Private farmers who do well will be able to increase their holdings by up to 99 acres (40 hectares) for a 10-year period that can be renewed.

Until now, private farmers have only been able to run small areas of land.

President (Raul) Castro, who took over from his ailing brother Fidel in February, considers reducing costly food imports as a matter of national security.

Since the 1959 revolution, some Cubans have been allowed to run small family farms. But most agriculture has been placed in the hands of large, state-owned enterprises.

...these (enterprises) have proved highly inefficient - half the land is unused and today Cuba imports more than half its needs. Rising world food prices will cost the country an extra $1bn this year.

The presidential decree was published in the country's Communist Party newspaper, Granma.

This is good news. I think it was me who argued that the reason communism was so successful in Cuba was because it wasn't communism. Of course, there is nothing in this that suggests long-overdue democratic reforms - but it does allow some level of economic freedom. I guess Raul Castro weighed up the advantages of increasing food production with the disadvantages of allowing a spread of market capitalism and worked out that food triumphed blind ideology.

The history of communism is very useful for us all to remember. Blind adherence to ideological dogma was based upon the assumption that Marx, Engels and Lenin were 100% correct in what they said, thus elevating them to demigods and their writings as inerrant and pure. But, as time went by, it became obvious that adherence to ideology did not result in the outcomes that were needed, namely a growing standard of living for all segments of society. Cuba, like China, has chosen the path of measured economic reform while maintaining a strong, authoritative government.

I applaud this move by Raul Castro. Anything that improves the well-being of Cubans is a good thing.

If the US government was really interested in the Cubans' welfare, and weakening the Castro regime, they would unilaterally and immediately remove the embargo on trade with Cuba. But they aren't, so they won't.

I actually agree with you that there is a lot we can learn from communism. I'm not sure how you meant it, but we in the West can see what doesn't work, saving untold millions of us the agony of having to experience it for ourselves.

Thank you so much for your comments on my blogs. I am really trying to figure some things out before our election in November... and with two of our children of voting age, I wanted to try to tie it all together... I am also trying to get them to think things through for themselves. I haven't had the time since the last post to research the other side of the FED issue. You've given me some things to look at and I so appreciate your taking the time to leave that response. I would love your input in the future as I muddle through.