Wilkins Ice Shelf about to collapse 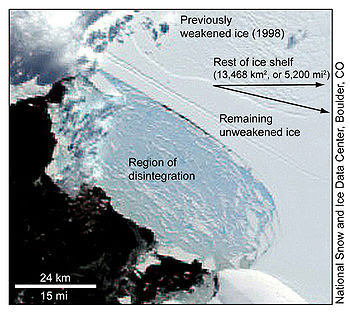 Okay, this is a rather serious issue. Climatologists about ten years ago said that one of the indications of global warming would be the collapse of the Wilkins Ice Shelf in Antarctica - and that it would probably go within thirty years. Of course, the fact that it is about to go now after only ten years is an indication that things are speeding up.

An Ice Shelf is a floating block of ice. An ice shelf is the result of ice from glaciers going out onto the ocean's surface. The melting of an ice shelf is not going to have any direct impact on sea level rises.

However, there are causes for concern.

The first thing is that this potential collapse will occur in winter. During any polar winter, the low temperatures are such that there is a seasonal increase in the amount of ice present. Yet this collapse is occurring at the coldest time of the year. This indicates that the water around this part of Antarctica is not cold enough at present to prevent any disintegration from happening. In other words, despite the fact that the conditions are helpful to prevent the ice shelf from collapsing, it is still in the process of collapsing. If the water temperature is still too warm even in the perpetual darkness of a polar winter, then that is not good.

The second thing is that, while the melting of an ice shelf is not going to do anything directly, it will expose Antarctic glaciers directly to liquid water. These glaciers and ice sheets are not floating on water - they are located above sea level on land. The combination of (comparatively) warm water and warm air will begin to melt these massive reserves of ice.

The world's sea levels have been rising for quite a long time. In recent years they have risen at a faster rate. Currently sea levels are rising 2.4 - 3.8mm per year. Most of that rise is, I believe, due to glacial melt from Greenland. While the collapse of the Wilkins Ice Shelf will only result in a slight increase in glacial melt by itself, its collapse is a harbinger of what is possibly to come, namely faster increases in sea level rise.

And the faster it gets, the harder it will be to stop.
Posted by Neil Cameron (One Salient Oversight) at 22:38