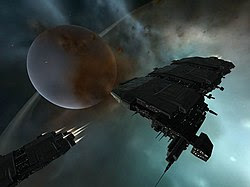 This is absolutely fascinating:

The game Eve Online has a major virtual economy, and many of the players form corporations to handle space exploration, mining, and manufacturing. So, in August, they hired a economics professor to be their "Alan Greenspan". He measures CPI and markets in the game, so that the game designers can institute virtual monetary policy. The PDF above is the latest quarterly report where he tries to address the debate about whether or not inflation exists in Eve Online.

How do you handle monetary policy in a game? In Eve, there is no loan system (though they are thinking about inserting one), so monetary policy consists of making minerals scare or more plentiful, or changing the powers of in-game objects, thus changing how players value them. For example, this PDF has a graph showing how changing the range of cruise missiles in the game affected their prices.

I remember a few years ago when I heard about people willing to spend real cash to buy good characters in World of Warcraft that there would be some interesting times ahead for online gaming and economics.

I love the fact that EVE Online has its own "Alan Greenspan" who controls inflation by adjusting the amount of resources present in the game - far more effective than the real world, though if God chose to he could adjust all the resources accordingly.

Of course people would say that such an economy would be limited to the online gamers themselves and have no real world application. I disagree. There is a commodity that our modern economy has complete control over, which can be produced or restricted at will. We can produce an infinite amount if we choose to, or completely rid ourselves of it. What is this commodity? Money.

Central Banks can induce inflationary monetary conditions quite easily - this is through its open market operations like reducing interest rates, reducing reserve requirements on bank accounts, or even simply creating the stuff out of thin air and distributing it to whomever you want to. On the other hand, central banks can induce deflationary monetary conditions just as easily - by increasing interest rates, increasing the reserve requirements, or getting rid of any income it receives (from overseas reserves for example). Both forms of monetary policy - inflationary and deflationary - rely upon the effect of the money multiplier as money passes through the economy.

What does this mean for us? Well, put simply, it means that central banks (including the Federal Reserve) DO have the power to completely control inflation if they want to. Inflation that is "out of control" is essentially the result of a central bank that is not using its powers properly (either through legal restrictions or incompetence).

For me, it means that it is more than possible that an economy could sustain Absolute Price Stability (zero inflation over the course of the business cycle). It also means that my idea for a taxless economy is also possible.
Posted by One Salient Oversight at 10:04