A Food crisis is emerging 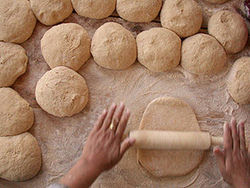 From the department of what is going on:

Egypt's government is struggling to contain a political crisis sparked by rising world food prices. Violent clashes have broken out at long lines for subsidized bread, and the president, worried about unrest, has ordered the army to step in to provide more.

The crisis in the world's most populous Arab country and a top U.S. ally in the Mideast is a stark sign of how rising food prices are roiling poorer countries worldwide. The World Food Program on Monday urged countries to help it bridge a funding gap in food assistance caused by higher prices.

I keep hearing occasional stuff about this and I'm wondering what is going on. Amartya Sen, a well known economist with a focus on poverty, has written reasonably conclusively that famine often arises when the food distribution system is damaged or has collapsed, resulting in both a famine and stocks of food unable to be directed where it is most needed.

But this is Egypt. Egypt is no longer a third world nation and has not suffered a famine for a long time (though they did in Old Testament times). What is going on?
Posted by One Salient Oversight at 21:06

Also sounds to me like "Murbarak gives everyone cheap bread I want it too". And likely that the bakers have also found another market for the flour that pays better than selling the cheap bread.

This article http://www.dailystaregypt.com/article.aspx?ArticleID=12543
very strong on it is corruption. But if price is better elsewhere that implies shortage.
Murbarak doesn't want to use USD$ on US wheat?

I admire Sen, too. You left out the key bit of his conclusions on famine: while food shortages may occur these days in isolated areas due to localized phenomena, it takes Man (and/or his bad government) to create a famine.

Mubarak's regime qualifies as bad government, but whether or not it is as bad as, say, Mugabe's...well, I hope not for the Egyptians' sake.

Hi Beamer,
it is also caused by mankind's recent fossil fuel enabled ability to grow at an exponential rate until the earth's photosynthetic ceiling is reached. We are now growing crops faster than ever (not giving the land a break because of our modern fertilisers) on more land than ever at cheaper prices than ever.