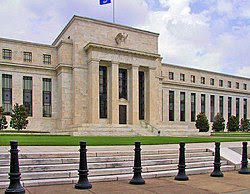 The Federal Reserve, struggling to prevent a meltdown in financial markets, cut the rate on direct loans to banks and became lender of last resort to the biggest dealers in U.S. government bonds.

In its first weekend emergency action in almost three decades, the central bank lowered the so-called discount rate by a quarter of a percentage point to 3.25 percent. The Fed also will lend to the 20 firms that buy Treasury securities directly from it. In a further step, the Fed will provide up to $30 billion to JPMorgan Chase & Co. to help it finance the purchase of Bear Stearns Cos. after a run on Wall Street's fifth-largest securities firm.

``It is a serious extension of putting the Federal Reserve's balance sheet in harm's way,'' said Vincent Reinhart, former director of the Division of Monetary Affairs at the Fed and now a scholar at the American Enterprise Institute in Washington. ``That's got to tell you the economy is in a pretty precarious state.''

The move is Chairman Ben S. Bernanke's latest step to alleviate a seven-month credit squeeze that's probably pushed the U.S. into a recession. The dollar tumbled to a 12-year low against the yen and Treasury notes rallied as traders increased bets that officials will reduce their main rate by 1 percentage point when they meet tomorrow.

There is an equal and opposite reaction.

The dollar fell the most in eight years against the yen as growing concern about widening credit- market losses was heightened by a Federal Reserve cut in the discount rate, and the sale of Bear Stearns Cos. to JPMorgan Chase & Co. for one-tenth of its value from a week ago.

The dollar dropped to a record low against the euro and the Swiss franc as the Fed made its first weekend change in borrowing costs since 1979. Traders increased bets the Fed will slash its benchmark target rate by 1 percentage point tomorrow, making U.S. assets less appealing.

``The dollar is facing a credibility crisis,'' said Koji Fukaya, a senior currency strategist at Deutsche Securities, the Tokyo unit of Deutsche Bank AG, the world's largest currency trader. ``All the markets are entering a vicious cycle.''

I'm wondering here whether Ben Bernanke does has a hidden strategy, rather than groping blindly in the dark.

By reducing interest rates, Bernanke is essentially creating more money. While such money creation is inflationary, it is pretty much going to rescue Wall Street investment companies that are bleeding red ink. So, on the one hand, Bernanke is rescuing financial businesses in trouble, but on the other hand he is doing this by creating inflation, thus transferring the pain from one sector of the economy to the economy as a whole. In other words, he is broadening the pain.

This whole subprime meltdown is creating a huge economic mess. Bad policies by the US Federal Reserve will only make things worse.
Posted by One Salient Oversight at 16:45