China, Tibet and the Olympics 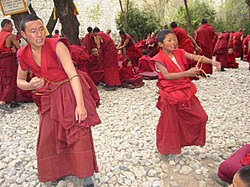 Ah yes. Tibet. Scourge of China and the interests of Richard Gere alike. What to do?

What should NOT happen is a boycott of the Olympics. It's not that I somehow think that China needs to be appeased or that the Tibetans don't somehow need justice. Sometimes boycotts are necessary, although the last two - 1980 and 1984 - were hardly effective and were conducted more out of spite than anything.

The problem I suppose is, firstly, the belief that the "side" I am on, namely the English speaking industrialised world, is hardly occupying any moral high ground. And this not just in terms of older history (ie Australia's treatment of Aborigines, America's treatment of their indigenous people, Britain's treatment of pretty much everyone) but also in recent history. If I'm going to argue for a boycott of the Beijing Olympics then I should also argue for a boycott against the countries that have invaded Iraq as well, including my own country.

In short, there a multitude of reasons for boycotting the Olympics or getting angry that certain nations are going to be there. That being the case, in theory no one should go.

The second problem, though, is more along the practical side of things. Boycotting the Olympics will not somehow soften China's resolve in Tibet. The Chinese government is not going to suddenly make Tibet free, recognise Taiwan as a sovereign country and turn into a western style democracy because a bunch of westerners decided not to attend a glorified sporting event.

What might hurt, though, is economic sanctions, though I would point out that any trade embargo against China would hurt America more than China, so that's out as well. Moreover it is inflammatory, and that is not what is needed.

We need to remember that the best sort of change is achieved slowly and carefully. Change is not wrong - in fact change is an essential part of how societies work. What hurts the most, though, is when change comes suddenly.

Take Iraq under Saddam. Saddam was a brutal dictator, but invading the country and destroying the nation's power structure has created anarchy and done far more harm to it than anything Saddam would have done.

Dealing with rogue states - and even states like China that have roguish elements - requires patience and time. Look at nations like Egypt, Syria and Libya - these nations are hardly examples of world's best practice, but they have moved over the years from being potentially bad states to being potentially good states. This should have been the goal with Iraq, and it should have been the goal in Afghanistan from the late 1980s onwards. It's also the goal we should have towards Iran, though I would argue that Iran is less a rogue state than it was in the 1980s.

Look at the problem with Cyprus. Both Greece and Turkey have been arguing over this Mediterranean island for decades and have occasionally come to blows. Yet the moderating effect of the European Union has forced both sides to make concessions and to approach this issue - which is hardly solved yet - slowly, carefully and effectively. As time passes, issues like Cyprus will lose its ability to stir up base emotions and a solution will eventually be found.

The same can be said about China and its problems with Tibet and Taiwan. Slowly, slowly is the best way. It is the most effective way. Oftentimes the best solution is not to be found in the flag of victory waving over a bloody battlefield, but in the bored looks of those examining the "small print" of agreements.
Posted by One Salient Oversight at 11:48

Did I hear something about the EU boycotting the Opening Ceremony.(I try to avoid them anyway.( Is the ROW over the way dissidents are treated or that China is there? Does any government say Tibet should be a nation of its own? According to Wiki when Tibet declared independence in 1911 no government listened. Perhaps because of the British invasion (sorry expedition) in 1904.

All so strange when I see the "rush" for acceptance of independent Kosovo.

Sounds like you and President Bush agree again, Neil.

Iraq is still messy in my mind. As far as I am aware, the 12 years of sanctions against Iraq have still killed more than the second war.

And not all of the collapse is America's fault... as much as I am disgusted with them lying to us about WMD's to justify setting up a "police station" in the Middle East to watch over the oil.

The real problem seems to have been the original British creation of the "nation" which had such disparate groups and century old conflicts all brewing and simmering under the surface. As much as I hate my country being deceived into Iraq under Howard, and hate the fact that I honestly believed them when they said Saddam had WMD's or was close to getting them, it is still a very muddled and mixed picture with ancient problems.

EG: Remember some of those Clancy scenario's where Saddam is assassinated and Iran takes over? There's all sorts of volatile possibilities in this region of the world, and Saddam's regime could have been taken out by any number of other possible assassins and/or missions. Then what? We'll never know.

It's a messy messy country, with 500 thousand kids dying of preventable diseases under the sanctions we helped impose. Something had to change, but what?

A terrible event today - they demonstrated at The Torch lighting ceremony. "Don't they understand the spirit of The Torch". Yes I heard Olympic officials talking like that. Then Why did they give the Games to PRC. Oppression of Christians, other religious groups - oh and yes the one all the fuss is about at the moment - Tibet. Pssst they also killed some 2000 of their own people in 1989. Just when Communism was collapsing in Europe they ensured it remained in power in Asia.