What will the unemployment rate be? 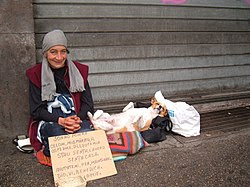 Friday 7th March is the release date for US unemployment figures. At the moment it is 4.9%.

The question is no longer whether unemployment is going up - the question is what will it go up to? As I pointed out the other day, unemployment rates rocket up very quickly when a recession starts, but take a while to come back down.

So whether this recession is a mild one or a bad one, we can expect a rather significant jump. A 30 basis point jump was experienced between November and December, with the rate going from 4.7% to 5.0%, before falling back 10 basis points to where it was in January.

Looking at the historical data, a one-month increase of around 60 basis points seems to be a significant jump. Certainly there were bigger ones, but 60 seems to be a good figure that is neither crazy nor optimistic. That means that an unemployment figure of around 5.5% would be my guess, though anything between 5.3 and 5.6% would be possible.

Further examination of historical data suggests that the worst result after 4.9% unemployment is 5.2%. Bloomberg is reporting that experts are predicting 5.0%.

Anything above 5.6% would be rather horrible. There was a 90 basis jump between December 1974 and January 1975 (7.2% to 8.1%) but that was some months after a recession began and after a few months of increasing unemployment. Would such a jump be possible today? If the February figures replicate the 1974 experience, unemployment would jump from 4.9% to 5.8%. Not impossible, but then, this recession will certainly be the worst in 25 years.

Update (0730 New York Time):
I've been considering a nightmare result - say 5.8% or more - and what effect it would have upon the markets. If it happens (namely the largest one month jump in unemployment in US economic history), I would expect the market to tank very badly very quickly, followed by Bernanke suddenly cutting rates again, followed by a market revival, followed by a severe tanking of the US Dollar that would push Gold past $1000 per ounce and Oil past $108 per barrel. Yes, that's a prediction - but only if the jump in unemployment rate exceeds historical benchmarks.

Given the way I teach intermediate macroeconomics, I could not have asked for economic new better fitted to the course than this morning's BLS employment report.

It was pedagogically perfect.

Of course, it was also really bad news. The arrival of 1/100 of a Great Depression, as I said toward the end of the class...

Posted by Neil Cameron (One Salient Oversight) at 21:06

Yep. The unemployment rate fell even though the employment to population ratio fell from 62.9% to 62.7%. Seems CalculatedRisk and the Angrybears know why - the labor force participation rate dropped.